Ashley Cole made his 100th appearance for England in a friendly game against Brazil, he currently has 106 caps – level with Bobby Charlton. This is a fantastic achievement for any professional footballer and Cole is only the seventh English player to hit 100 caps. However, did reaching this pinnacle do anything to alter the way he is viewed by Arsenal supporters? I doubt it, but I think it’s worth considering the bigger picture on this, and I also feel that if Cole is capable of quiet reflection, he should thank his lucky stars he was fortunate enough to begin his career at Arsenal.

I know that I’m supposed to automatically insert a “c” in front of Cole’s Christian name in any Arsenal blog, but I’d like to consider whether there is a case for acknowledging his contribution to Arsenal’s second most successful period in history? I’m not suggesting that the slate be wiped clean, but at the same time, I believe that the situation is more complex and there’s a greater degree of context required to explain this complicated individual. After all, up until 2005, Cole’s commitment to the Arsenal cause was unquestionable. He genuinely loved the club, the supporters and the team he was a vital part of. He won 3 FA Cups, 2 titles and is an Invincible. My contention is that, Arsenal’s penny pinching also contributed to the breakdown of relations between club and player and there are lessons we should learn from this. 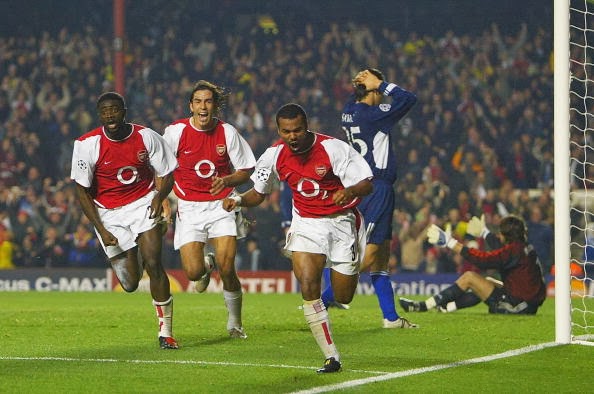 Cole wasn’t the first (and definitely won’t be the last), to leave Arsenal to earn more money. A big difference between Cole’s generation and that of older footballers is that they were allowed a private life and contract negotiations in particular were conducted in secret, usually without the interference of agents. Of course many current players actively court attention only to bitterly complain when the tabloids start to report the unwanted negative stories.


However, compare and contrast the way that Frank Stapleton and Liam Brady are viewed by Arsenal supporters in retrospect, compared to Cole, and more recently, Nasri and Van Persie. I’m sure that Liam was impeccable in his dealings with the club when he was managing his exit from Arsenal to join Juventus, but Stapleton? Allegedly, the nature of his attitude to meetings when he was lobbying to join Manchester United left a bad taste in several mouths at N5, but details about the meetings weren’t leaked and Stapleton never splashed the details all over an autobiography. But wanting to leave Arsenal for more money is nothing new; it’s just that players are under the microscope more these days.


I’m convinced that Cole is his own worst enemy and there’s rightly no way back for anyone, who when offered £55,000 per week to play the game they love, reacts by saying that “I almost crashed my car in disgust”. But Cole is a central figure in the “Entitled Generation” of footballers who believe that they must be treated fundamentally differently than the rest of us. So to what respect can some of his behaviour be explained by his membership of this exclusive club and the prevalent hegemony in place amongst its inner circle? At the time of the events Cole was 24 years old, and to say he could have been advised better is something of an understatement.

By the way, it’s also important to remember that he was after £60,000, Arsenal’s refusal to push the financial envelope (seemingly a constant factor) was the final piece in the jigsaw that set in play the events that created the major reason for Arsenal supporters dislike of Cole. The meeting at the Royal Park Hotel on Sunday 30th January, 2005.


Cole finally burnt his bridges with Arsenal and its supporters by taking part in this high profile and very public meeting with among others, Mourinho and Peter Kenyon. This meeting led to an 18 month ban for Cole’s agent and initially, cumulative fines of more than £700,000. Cole had committed a dreadful act of disloyalty, irrespective of whether or not the club reneged on an agreement to pay a certain weekly wage, Arsenal deserved better. But over time, Cole seems to have carried the entire can, Chelsea’s behaviour was worse; they’re supposed to know better and the agents as usual, just saw the pound signs and beggared the consequences. Also Arsenal, 5 grand a week....


I’m conscious that the one truth here is that Arsenal’s supporters were the only ones completely devoid of blame. Cole behaved very, very badly, but he was a young man and I think it’s fair to say that he may not be the most analytical of individuals. In the aftermath, forced into a corner (by his own actions) he did what most footballers would do, he came out fighting, players these days have a very simple logic – you are either 100% for them or against them. Cole’s spiky personality made things worse; he now seemed to look for opportunities to demonstrate his newly found anti-Arsenal credentials. But should this erase the fact that, up until this point, he had been very committed to and focused on winning trophies with Arsenal?


It’s natural to want to verbally abuse a player who leaves in the circumstances Cole did, my contention is that sometimes, after a reasonable period of time, it’s important to take into account the 360 degree view. Cole’s been gone for over six years, I remain glad to see the back of him, but Arsenal isn’t 1984. Just because a player acts selfishly, crudely and shows poor judgement, there’s no automatic reason to airbrush him out of our history and don’t forget that although Cole may have won more caps as a Chelsea player, his status as the best left back in the world (which he was until very recently) is more down to his time in N5 than SW6.