Italian Police take Arsenal fans back to the 1980’s

I’ve been watching Arsenal since the 1970’s and remember vividly how travelling supporters were treated during that and the following decade – no better than cattle, but of the psychotic, knife wielding variety. The police believed that every game was destined to dissolve into bloodshed and matches were “bathed in the half light of violence” (Nick Hornby – Fever Pitch).However, over the years the attitude of the police has improved dramatically, as the behaviour of the fans has improved. Sadly, last Wednesday the Italian authorities and their unarmed and armed police thought it best to go back to the old days.

Sir William Garrow was the first to coin the phrase “the presumption of innocence” in the 19th century. It is a fundamental and critical aspect of our society and the basis of our legal system. However, it’s obviously been lost on the Police and Carabinieri of southern Italy. 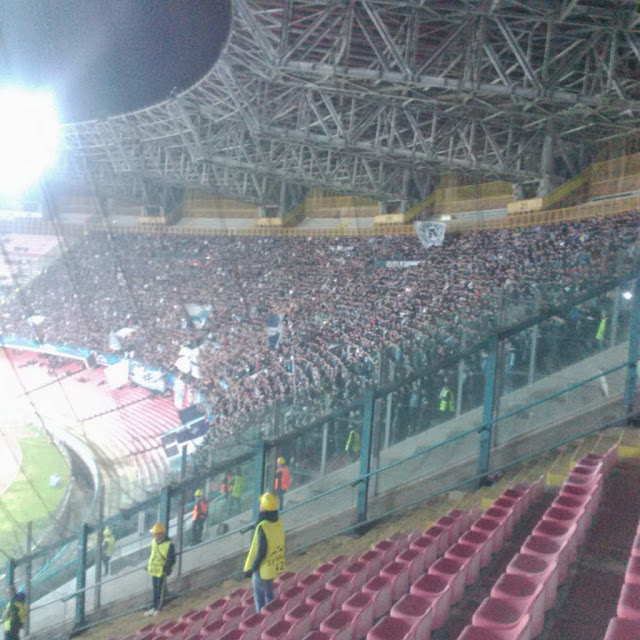 I found Naples a great place. It’s a lively, bustling city that’s seen better days (haven’t we all?) but you can get a fantastic seafood lunch with a bottle of house wine for ten euros, and the local people are generous, spirited and very friendly. Before the game last Wednesday we came across Napoli supporters who were on the excitable end of the “lively spectrum”, but there was no issue or confrontation. They simply get on with their pre-match preparations, which appears to be winding themselves into a lather by shouting “Napoli” at great volume whilst waving blue and white scarves round their heads – knife wielding nutters? No. Let’s not forget that the only man convicted of the attack preceding the home game against Napoli, came from the charming Amalfi hamlet of Portsmouth.

Therefore the precautions taken by the local police, presumably with the complete support of Arsenal Football Club are extraordinary. We were told that to attempt to travel to the San Paolo would be suicidal, so therefore to use the buses laid on for supporters from the sea front.

These were due to leave in two trenches at 6.30pm and 7.30pm; the game was to kick off at 8.45pm. When Arsenal sent out the tickets we were told that rigid security checks were in place and each ticket would be uniquely printed to the identity of the purchaser. We would have to be able to provide photo ID to support the complex procedures put in place. When the tickets arrived, Arsenal had written our names on the front in biro, that must be what they meant by “rigid security checks”. 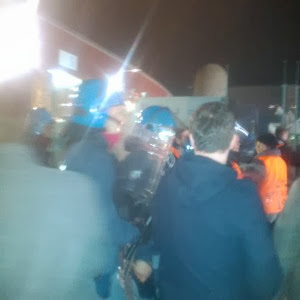 On arrival at the bus assembly point, a line of tooled up Carabinieri shouted “tickets”, we showed them whichever piece of paper came to hand first and they let us on the buses. That was it, no ID required, I could have held up a ticket for the 43 bus and they would have let me on (quite apt…)

After going nowhere quickly initially, we set off at 7.45pm. The “authorities” and I suspect that this includes Arsenal, decided that we could only arrive at the San Paolo after every single Napoli fan was inside. So we went round the city, and then we went round the city again and again. Stadio San Paolo is eight miles from the port (25 minutes top); we eventually arrived at 8.55pm, the game had kicked off at 8.45pm untroubled by our non-attendance. Thus far, this could be described as poorly planned and shoddily executed, but we had arrived, late, pissed off admittedly but we’d got there.

The next five minutes could be described as ridiculous, were it not for the very real chance that things could have turned genuinely ugly, very quickly. This was principally down to the Arsenal supporters exercising mature restraint and keeping calm despite severe provocation to the contrary from the Italian police. They had decided to form a barricade across the road leading to the entry gate, with a small opening in the centre whereby one or two supporters could get through at a time. Hard to tell, as there were some supporters already in the ground, but I would estimate that between two and three hundred supporters got off the buses at the same time, having been taken on a wild goose chase for 80 minutes  and were then herded towards a line of police who had decided to create a bottle neck. 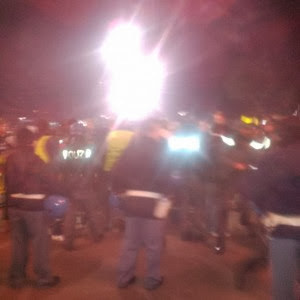 It was preposterous as it was exactly tactics like these that have created disasters in the past. As Arsenal supporters (quite understandably) started shouting their frustration, the local commander decided to call in police clad in riot gear. Everyone, I think, got through in one piece, but had we been, how can I say this? A different “type” of supporter, it could have been carnage. After getting through the barricade and while queueing to get into the stadium, I saw a collection of Arsenal stewards, completely conspicuous in their absence up to this point.

At half time, I found them keeping a low profile sitting together. I had the following exchange with one of them:

“Did you see what happened on the way in?”

“Yes, it was dreadful; they treated you like high security prisoners”

“What action are you planning to take?”

“Our manager is going to write a strongly worded letter to UEFA”.

So, there you go, a strongly worded letter, I bet UEFA will be quaking in their boots about that. As for the game, we played well enough for the first half, but we’re starting to look a bit jaded and I think the lack of depth in the squad will cost us this year.

As for the Napoli supporters? Fantastic, noisy, committed and whole hearted their coppers on the other hand…..