Injury a disaster for Theo but not for Arsenal (+ Ramsey news)

I am absolutely gutted for Theo Walcott, imagine being in his shoes at the moment; he's looking to be a key part of the first Arsenal team for 5 years that looks like making a genuine title challenge and is almost certainly going to be part of England's squad in the World Cup in Brazil. Then on Saturday evening, he chases back, makes a good challenge on Danny Rose, wins the ball, feels something "go" around his knee and two days later - bang! Six months out (minimum).

To be completely honest, I haven't always been Theo's biggest fan, however, in the last two seasons he has improved dramatically. I still believe he doesn't always make the right choices over when to cross, shoot or attack the area, but last season he scored 21 goals in 43 appearances - that's on a level with Thierry Henry. This year he has scored 6 times in 18 appearances, so he's getting there. He's a big loss, but let's face it, the only person who has the right to be devastated is Theo Walcott, for him it's unfathomable, he'll be 29 before he plays in a World Cup. So good luck Theo, I hope you get to grips with the situation as soon as you can. 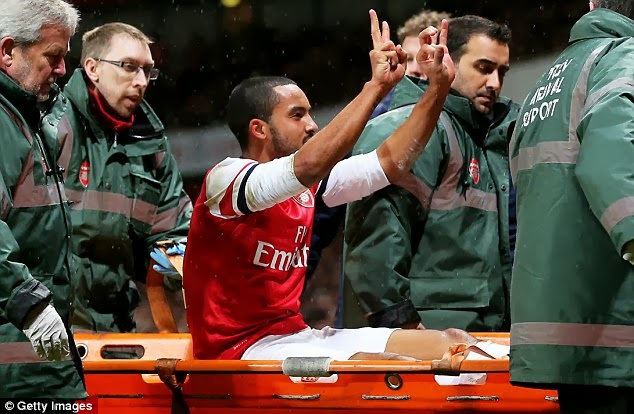 For the rest of us, we need to take a step back and consider where we are. Most Arsenal supporters that I know believed that the lack of depth of the squad was going to cause problems at some point this season and we might be at that point. However, this isn't like 2008, when Eduardo's savage injury wrecked his season (almost his career) and the team had a meltdown, as that occurred after the transfer window, whereas, at least we have three and a half weeks to explore some options.

Furthermore, Alex Oxlade Chamberlain is very close to a full return and Serge Gnabry looks ready to make a real impact this season. So we have the cover available in Walcott's wide right role. The question is to make sure that we cover his goals. There is a point in Moneyball when Billy Beane, having sold the Oakland "A"'s best three hitters, realises that he doesn't have to replace the players, just their runs. 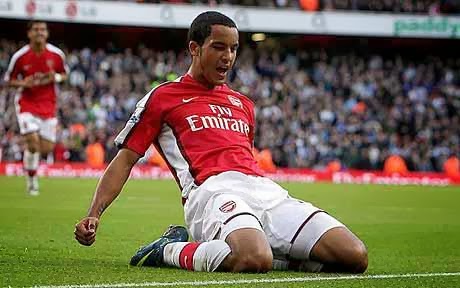 Let's assume, Theo was capable of another 20 goal season, a distinct possibility, then we need to have players in positions who are able to score a further 14 goals, over a run of games including 18 league matches, 2 in the Champions League and (pure guesswork) 4 FA Cup matches. So that's a further 14 goals needed in a 24 game run, I think that's eminently achievable.

The encouraging news is that Ramsey might be two week's away from a return to training.
I am very disappointed for Theo Walcott, and let's feel sorry for him, not us as Arsenal supporters, but I'm confident that we can cope. Let's also not overlook the fact that when he was out with his abdominal injury we won practically every game.