The M6, just after the first junction, when you've just come off the M1. That's where I was when I heard that David Rocastle had died, it was a Saturday morning, the 31st of March, 2001. I was driving back to Manchester having been in London, it was a lovely day, warm and sunny and I was listening to Ian Wright and Mark Bright on Radio 5 live. Ian Wright had obviously been given the news and was tasked with breaking it to the audience, I remember the catch in his voice and he started crying as he broke the news that David had lost his battle with non Hodgkin's lymphoma, Mark Bright was also in tears. David was 33 years old.

I've decided to write a series of profiles of Arsenal legends, 14 of them seeing as it's 2014, purely arbitrary. David Rocastle isn't the best player to have ever played for Arsenal, he's not even the best player I've seen in an Arsenal shirt (Dennis Bergkamp), but he's my favourite player from the period when I was closest to The Arsenal. In the mid to late 1980's was when I was a real supporter, I went to watch the team whenever I could and it was easier to identify with the team in those days. It wasn't just a case that they were mainly English, they were mainly London lads as well, and a lot of the team from the George Graham era were Arsenal products (Adams, Thomas, Merson, Davis, Rocastle, Keown, O'Leary..) 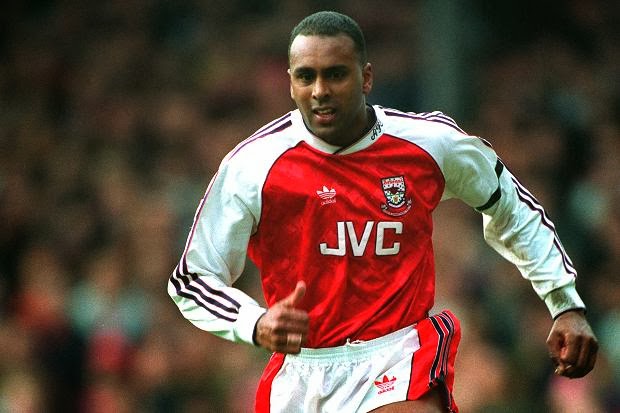 Football was different then. For a start, it was a lot cheaper! We would meet up at The Plimsoll for a few pints (always lager) at about 1pm (matches were always played at 3pm on a Saturday afternoon) and then walk to Avenell Road, get a programme for a quid and then to the Clock End and pay a fiver to get in. After the match we would head into the West End for a few more pints and then home - all in all, the whole day would cost about £25 or £30. In those days, when watching football, we probably had more in common with supporters from the 1930's, than with regulars at "The Emirates" today.

Attendances then were between 30,000 and 35,000 for league games, occasionally, for example the league cup semi-final against Everton, there were over 50,000 in the ground (one of the rare times I've felt that the situation was dangerous - we were really packed in for that match). So, as a result, it was easy to get into Highbury five or ten minutes before the whistle. I had a mate, Gary, who would walk out of the Arsenal tube station at a given time before the game and say "feels like about 33,000", he was usually right (within 500 supporters). 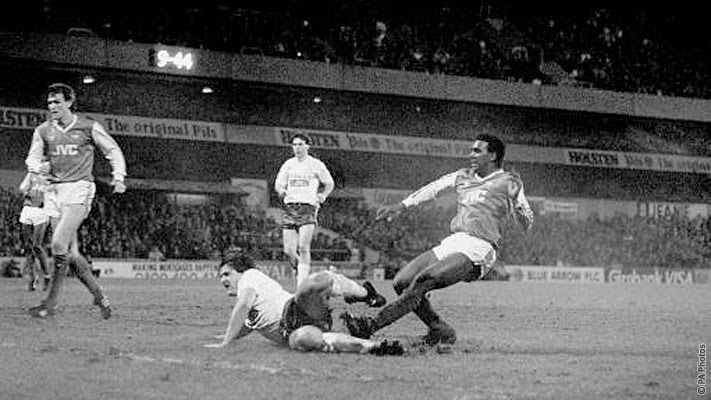 What made David Rocastle so special was that he could really play, when he first came into the side, he played in front of Viv Anderson and the two of them were magnificent. Viv was an exceptional player and was always looking to release David, urging him to take on the full back (which he always did). Because David was so skilful and could run with the ball seemingly glued to his feet, he was able to attack the left back either side, he would feint to go wide and then cut inside the defender at full pelt and attack the goal area. It was thrilling, when Rocky got the ball, the whole crowd would crackle with anticipation. This was all the more evident as at the time, Don Howe's teams were "functional" to say the least.

When George Graham arrived players like David started to get regular games, I think George wanted to break up the old boys club of well paid senior professionals and the apprentices were cheaper and more likely to play the way they were told - George was all old school Arsenal discipline. Results started to improve and the younger players started to become the basis of the team, and although we were never Sacchi's Milan, Arsenal could play and David Rocastle was the stand out talent. 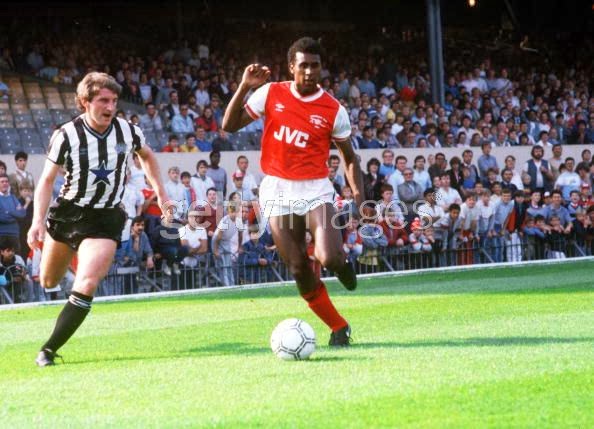 Check out the clips on YouTube; the goals against Villa, 'Boro, and United are superb. David was two footed and he was so versatile, he had the lot, he could lob, chip, fade the ball and could hit it like a hammer with both right and left feet. I remember a goal at Anfield in a league cup game, David hitting the ball on a half volley and the keeper not even reacting, it flew past him so fast. He was tenacious as well, tough, 5"9, but over 11 stone and able to take care of himself, he was in the thick of it at Old Trafford in the 20 man brawl in 1990. But most of all, he was a graceful, explosive, brilliant footballer.

When David was sold to Leeds in 1992, he was still only 25. I'm still not too sure why George sold him, Rocky was adored by Arsenal supporters in the same way Liam Brady had been and I don't think the crowd has ever warmed to a player in the same way since.

I've just read a fantastic book called The Nowhere Men by Michael Calvin. It focuses on football scouts and he interviews Terry Murphy, an ex Arsenal scout who recalls David talking to a group of young Arsenal Trainees. David told them: "Remember who you are, what you are and who you represent".