Yesterday, I went with my wife and two youngest kids to the Football Museum in Manchester. If you love football and you're ever in the city, go, it's fantastic. Admittedly, when Manchester United are at home, it's packed with Norwegians dressed in arctic clothing who crowd around the exhibits checking with each other how to find Old Trafford, but nevertheless it's a deeply rewarding experience.

Just about every aspect of the game is covered, it's history in Britain (how we invented and developed the game basically), how it was exported to the world and it's subsequent global reach and domination as the most widely watched and played sport in the world. A real gem in the museum is tucked way in a corner, it should be more central because a lot of visitors miss it. It's a piece of video, displayed on a wall and is a very moving animation of key excerpts from the Taylor Report. There is an old fashioned crush barrier in front of the video wall and the impact is devastating. For me, the most chilling comment is that the Taylor Report in the piece was the ninth of it's type and Taylor expresses his horror and disgust that football stubbornly refused to act on the previous reports and the disasters that prompted them. 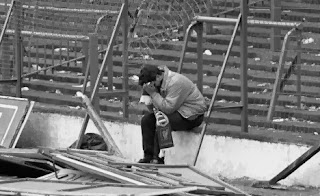 Hillsborough was so terrible, that football had to act, Taylor highlighted poor policing as the most crucial contributory factor, but also insisted that stadia had to be all seated and fully ticketed, in that all spectators would purchase a ticket in advance of the game. I remember the match in Sheffield like it was yesterday (we were at home to Newcastle - beat them 1-0) and the Taylor report was both inevitable and necessary. So why is it just over twenty years later, there is a lively debate about whether or not to re-introduce standing at football matches?

All debate is valid if it's well intentioned and I'm an advocate of safe standing for reasons I'll come to in a moment. However, first of all, I think it's necessary to take into account the feelings of supporters of clubs that have been personally affected by football tragedies: Liverpool of course, but also Bolton, Rangers, and Bradford. For them, the debate is more raw, visceral even and it would be callous to expect followers of these teams to be able to discuss the issues dispassionately. Despite this, I feel that there are three significant reasons why an element of "safe standing" should be considered. 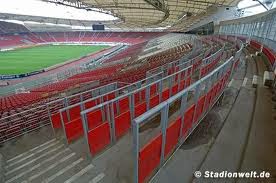 Firstly, technology has advanced to a point whereby the rail seats used widely in Germany, with restricted space and solid barriers as opposed to a patchwork of crush barriers on open terracing are reliable and have been tested over a long period and found to be safe.

Secondly, standing in seated areas at football matches is endemic and in it's own way, poses different but equally challenging safety issues as traditional terracing.

Thirdly, the prices at football matches (in particular in the premiership) restrict regular attendance to the type of supporter more likely to enjoy the chance to stand at a match without abusing the opportunity and using it as a chance to endanger others around them.

Therefore, let's have the debate, be mindful of the sensitivities in place and perhaps a limited trial would be a good idea.


Follow us on twitter at @RightatTheEnd and we'll follow you back! We value contributions from everyone and we're keen to hear and read your thoughts.
Tagged