The Man Who Hates Arsenal

Ceteris paribus, it’s Latin for “all other things being equal”. It assumes that there is a level playing field (very suitable for football) and that normal conditions apply.
There are numerous permutations in football, but let’s examine the “constants”, both teams have the same number of players, the ball is the same for everyone, the pitch is the same, you play the same number of away games as you do home games. Critically, the referee and assistants will apply the rules of the game to both sides evenly and equally.


There are 18 select group referees (qualified to be an official in the premiership). Therefore, you would expect that each referee would officiate a given team twice a season and that over a season, or to provide a more comprehensive statistical base, five seasons for example, you would expect a team to be awarded roughly the same number of key decisions. As a result, an individual football club wouldn’t endure significant deviations in the number of games won, lost or drawn depending on the man in the middle. 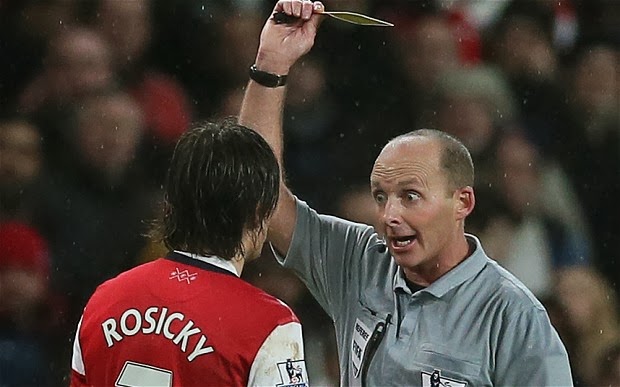 That should be the case unless your team is Arsenal Football Club and your referee is Michael Leslie Dean. This is the gentleman who presided over the league cup defeats to Birmingham City (2011 final) and Bradford City (2012) and the FA Cup home defeat to Blackburn Rovers (2013), as far as I am concerned he is at the very least, the kiss of death, or at worst – the referee who hates Arsenal.


Earlier this month, Southampton pressed the FA to ensure that Mark Clattenburg wouldn't referee any further games involving their club because of, let’s face it, a fairly tepid criticism of one of their players. I would invite you to consider the statistics below and then suggest that Arsenal FC take out a banning order on Mike Dean setting foot in the borough of Islington ever again.
First of all, this is Arsenal’s record over the last five, completed seasons:


Let’s now consider Arsenal’s record in games where Chairman Mike is the referee These stats are the totality of Arsenal matches refereed by Dean:

So in a nutshell, when Dean is the man in the middle, we are more than three times less likely to win and twice as likely to lose. Dean also presides over a lot of Arsenal matches, 22 provides, as far as I’m concerned, a more than decent statistical base.


Next, let’s compare and contrast Dean’s record when he is in charge of the other “big six” clubs:

I think that there is a clear picture here. Tottenham have consistently finished behind Arsenal every season that Dean has been a top flight referee, but their loss rate is 17.6%, whereas Arsenal’s win rate is 18.2%?

If Brendan Rodgers looks at City’s loss rate of 14.3% he might want to add Dean to his list of referees who should be barred from presiding over games involving the petro-dollar fuelled lottery winners along with Bolton based Lee Mason. 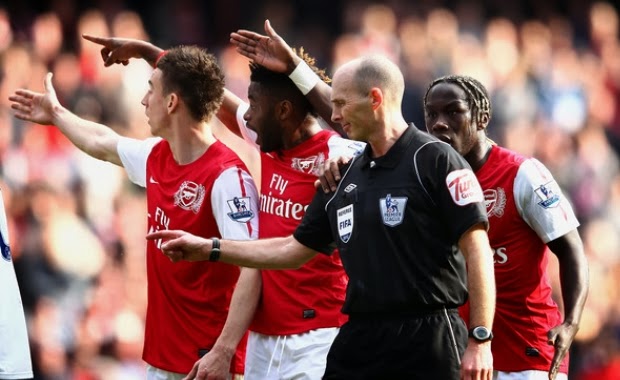 It’s not just the statistics I dislike about Dean. It’s the way he referees matches that grind my gears. He is very fast to make decisions (inevitably against us) without checking with the often better placed assistant. He sees a situation and either (a) emphatically signals his decision, usually accompanied with an unmerited card, or, (b) sees a genuine foul and decides to emphatically wave away the wronged party, and book them for dissent.
There used to be a crumb of comfort in that referees had to retire at 48, however, since it was challenged via European laws, referees can continue into their fifties. Dean is 45, so I assume that we’ll have to put up with his myopic twittery for quite a while yet.