To Buy or Not to Buy

First things first, we actually deserved to get beaten last night, so let's be glad of the point. We were all over the place in the first half, Arteta looked very rusty and both full backs were severely tested. I imagine that Monreal will get a roasting from supporters and he did look "bambiesque" at times, but Luke Shaw (who looks a £15 million player) destroyed Sagna for most of the game. The attacking three midfielders didn't track back sufficiently to provide enough cover and as a result there were huge gaps between our defenders and forward players, so Giroud was totally isolated. 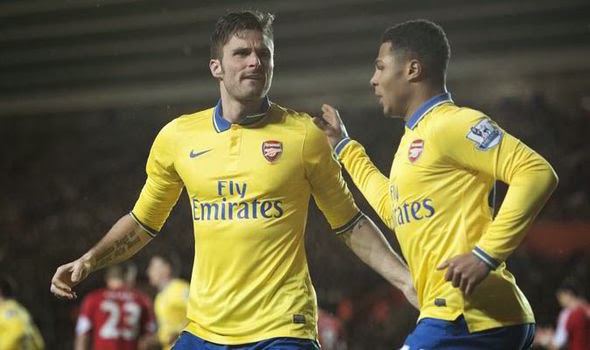 So we looked distinctly out of sorts, we missed Jack of course and we are missing Ramsey's dynamism, but we have as many midfield options as any other team in the league so there's little excuse for the first half performance on that basis. However, after the break we were much better. We are far more effective when we move the ball quickly, we are a classic tempo side as we have players who can receive the ball in tight positions and pass it quickly and accurately (this is why United have spent £37.1 million on Mata).

The goals were very well taken, especially Giroud's and then we committed the cardinal error of throwing away the lead cheaply. This Arsenal team is much improved due in part to a far better defensive shape and discipline. When I was young, I was always told to "keep it steady for ten minutes after scoring". We scored twice and then decided to throw the doors wide open for Southampton to gallop through the wide open spaces created by absent midfielders. Not good enough.

However, this was an excellent Southampton performance. We need to take a look at what their academy is producing and how because it's the best in the league - by far. 18 year old Sam Gallagher looked like the real deal last night, he should have scored, but his movement and control were superb. 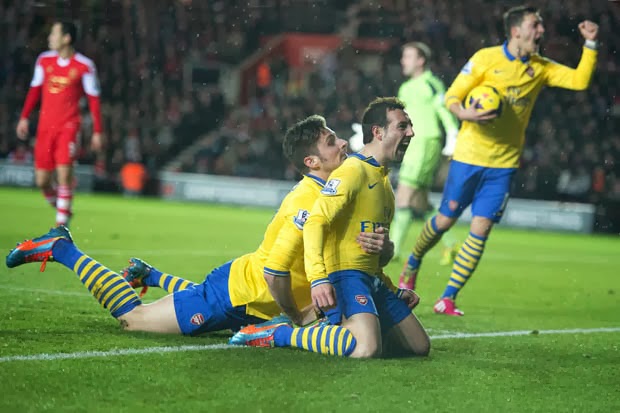 I'm keen to comment on one of the hot topics last night, namely that Podolski was kept on the bench until the 89th minute. There was outrage on twitter that he was unable to contribute last night. This simply doesn't add up, I'm a big fan of Lukas, but there is a feeling in the club that he is an out and out forward and doesn't do enough defensive covering. We were down to ten men, quite rightly, Flamini's challenge was stupid and he deserved to be sent off, and we had to keep our shape, and going for the win could have cost us all three points, so I agree with the straight swap of Podolski for Giroud, perhaps it could have happened a little earlier.

Despite this, we were outplayed in the first half and the second half was quite even - point gained. 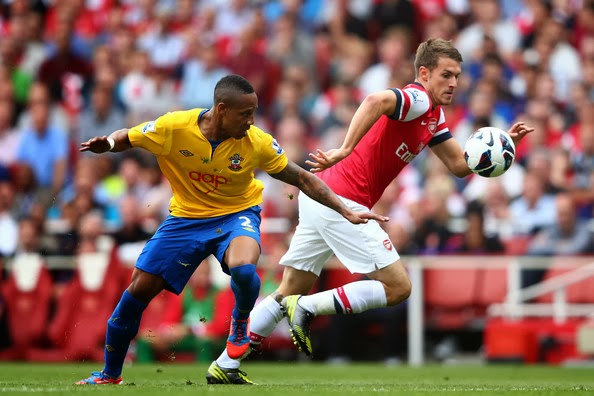 The worst news of the evening was that Aaron Ramsey may be out for a further 4-6 weeks due to a tendon strain. Apparently the manager played this down at the post match press conference but any delay on his return is bad news. Which leads me to look at the prospect of Arsenal buying in this transfer window.
Should we? Absolutely! Will we? Probably not...

Mata's move to United is exactly the type of business we should do as he is an established premiership player who can fit in to a team and produce straight away. Draxler doesn't offer that prospect, and if he's available for a better price in the summer then we will wait. The one player that we should go for is Demba Ba, but it all depends on how keen Chelsea are to sell him. I know for a fact that they were desperate to offload Mata and would have even sold to Arsenal if we needed that type of player. I think that this relates to the situation between Mata and Chelsea but if there is a new realisation of the need to comply to FFP regulations at the bridge, we should go for it.

Ba is just the type of player we need, because we don't have that type of player. He's also the type of forward that Özil is best suited to supply. However, I'm almost convinced that this won't take place.
So let's move on, Palace at home on Sunday, play well, score goals, three points.