Tomás Rosický - Hidden Gem, in praise of the Little Mozart

I remember seeing the news that Tomás Rosický had signed for the Arsenal in May 2006 on ceefax (or teletext) and was both surprised and delighted. The signing took place in advance of the World Cup, which was unusual in it's own right, but crucially Tomás was a class player, nicknamed the "little Mozart" from an early age, he was also a near permanent fixture in both the Borussia Dortmund and Czech Republic teams.

He was one of those players that always caught the eye, he moved and passed the ball like a real footballer, and he was obviously on the cusp of great things and we were buying him at the age of 25, just about to enter the most effective 3-4 years of his career. 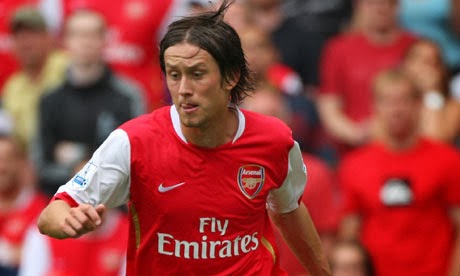 I feel sorry for Tomás for two reasons; first, his injuries have limited him to less than 20 league games a season and second, his career has been played out during an era when Arsenal were paying off the debt of building one of the best stadia in the world, as opposed to building a world class squad. Do the math (as our cousins from across the pond like to say), imagine £650 million + being invested on footballers?

Therefore, for Tomás Rosický, it's a frustrating picture; when he scores two great goals against Liverpool in a 3rd round FA Cup game at Anfield during his first season (I was at the game with my daughter and she's never forgiven me for being responsible for missing both), we thought we had a real player on our hands, but his career at Arsenal never really got going.

He suffered a significant hamstring tendon injury in 2008 and didn't kick a ball for 18 months. That is a massive gap in anyone's CV and on his return Tomás failed to impress, there were snatches of the old player here and there, but when you talked to supporters at matches (especially away from home) there were mutterings of discontent about him. It took a while, but then something wonderful happened, he played Spurs off the park in February 2012. This was a huge game for Arsenal, failure to win would have meant missing out on Champions League qualification for one thing and Tomáš was superb.

Since then, I would say that Tomás Rosický has been as good as anybody in an Arsenal shirt. When he's been played, he's rarely let us down (he played poorly in the 8-2 humiliation at the Theatre of Muppets but he wasn't alone) but apart from that, he's been excellent. I think that the reason for this, is that, like the clever footballer he is, he has re-designed the way he plays. Whereas previously, Tomás was at the heart of everything - although he still plays this role for the Czech Republic, he made himself into a modern link player. 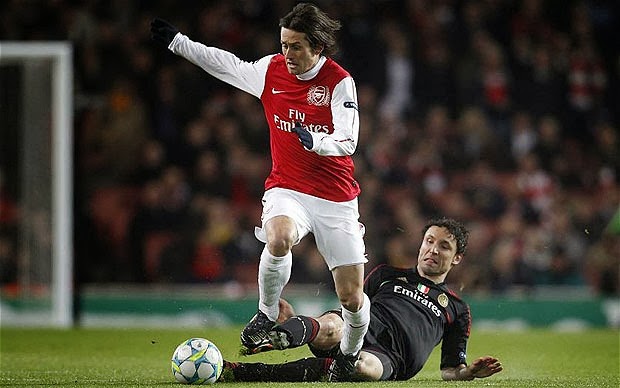 When he's on the pitch he always makes himself available for a pass, but he knows when to make it simple and when to up the ante and try and start a meaningful attack. This requires an uncanny ability to read the game, but Tomás also has a good engine so he's able to start the move (he often spots Giroud coming short for the ball with his back to goal) passes, collects the return and then makes the vital pass that plays in the wider player (Walcott, Cazorla, Wilshire, Ozil, Sagna) who then slide the ball into the most dangerous area.
When non-Arsenal supporters talk about admiring the way we play, they usually mean this passage of passing and it relies very heavily on footballers with the quality and vision of Tomás Rosický.

Tomás is now 33 years old, so it would be reasonable to expect diminishing returns from now on, but I firmly believe that he's vital this season. At the start of the term, Glen Hoddle was asked about Arsenal's depth in midfield, bizarrely the question asked was "do Arsenal have a problem as they have too many midfielders?" Hoddle said that as it was a long season, having more midfielders, bearing in mind this is where the bulk of the match is played, is obviously a good thing.

For the first time in ages we are top of the league in January, if we were to go on and win it, I'd be more pleased for Tomás Rosický than anybody in the playing squad.

Follow me at @RightAtTheEnd, I look forward to reading all your opinions on Arsenal Football Club.
Tagged