Why do the BBC have a problem with Arsenal?

Let me just state that I don’t have a specific issue with the BBC per se, I think in general they do a great job, all that entertain and educate stuff – fantastic. Admittedly they appear to have the same approach to management as an anarchist collective, but I’m writing this listening to Radio 5 Live and overall it’s spot on.


However, although I don’t have much of an axe to grind against the BBC as an entity, can the same be said for the BBC’s attitude to Arsenal Football Club?Yesterday morning I was listening to 5 Live and they were covering the games having been played on New Year’s Day and there wasn’t a single mention of the team currently leading the premiership - nothing.


The 5 Live “sports-caster” George Riley is currently engaged in a one man competition to see how few words he can use to describe Arsenal in a report – five is his record so far, come on George, put your back into it, surely you can do it in two: “Arsenal won”, “Arsenal drew” and “Arsenal lost” would suffice. It seems to me the BBC likes it when Arsenal are in trouble, in fact they have produced a programme (the season before last and the week before we beat Spurs 5-2) to discuss “where is it all going wrong with AFC?”


So I guess that they must be gutted at the moment, top of the league, still in the Champions League after surviving a tough group and just about to host Tottenham in the FA Cup.


I know as football supporters we have a fascination with conspiracy theories and there is one in circulation, that there is a media preference towards the hugely supported Manchester United, as they are concerned that by upsetting such a huge constituency they could risk viewing/listening/reading numbers – or worse advertising revenue, by persistently “going negative” on United. 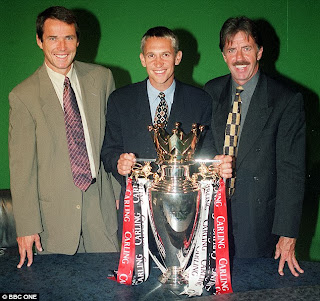 If you’ve ever read Bob Wilson’s book “Behind the Network” he describes this in some detail. When he worked ITV, he wrote that the channel were keen to show United matches because, understandably, as they have a massive support, more viewers would tune in and there would be a far broader commercial footprint. I don’t necessarily subscribe to this theory, although it does make perfect commercial sense.


Ironically, the press are treated like vermin at United’s training ground press conferences, they are herded into a freezing cold waiting area, where the vending machines are vastly over priced and they are always on the edge of having their accreditations snatched away if they ask the wrong question. Does this sharpen their pens when they are reporting on matters United? Does it hell, they’re terrified of them and also alienating their huge fan base.


By comparison, Arsenal is a relatively well supported club with a fan base predominantly in London, Hertfordshire and Essex. Fortunately we don’t have many of the “glory hunters” (not anymore anyway!) that choose to follow United and from my formative generation in the 70’s and 80’s, Liverpool. I live in Manchester and count a good number of Manchester United season ticket holders as friends and trust me, they hate people from Milton Keynes who couldn’t find Old Trafford with a map and a compass and clear directions. However, these are exactly the type of “supporter” that influences the news agenda that we all have to digest. They have a cumulative power with a distinct reach.


The BBC should be beyond all of this and that’s why it irritates me when that they seem to fall into the same trap as commercial organisations that are vulnerable to punters voting with their feet. Do you remember the other season when we played Stoke away? The vitriol dished out to our manager was disgusting; the next time you feel like criticising Mr Wenger, just imagine what it would be like to turn up to work and have to tolerate 20,000 men, women and children (for heaven’s sake) screaming “paedo” at you. Utterly beyond belief.

A Confederacy of Dunces?

That afternoon, naturally exasperated by a disappointing performance, Mr Wenger gesticulated and stamped his feet but still ignored the abuse shouted at him from yards away. How did Match of the day comment on this? Alan Shearer and Alan Hansen, ex players who are to punditry what King Herod is to babysitting, roundly praised the Stoke crowd and at the closing credits of the programme Gary Lineker chose to ape the actions of one particular Stoke supporter who thought it was appropriate to imitate our manager’s (admittedly) amusing arm gestures. Could you have imagined him doing that to Fergie? No chance.


Years ago, Nick Hornby’s Fever Pitch referred to Arsenal as they unloved Visigoths of football and described the reasons for our unpopularity – we were rich, London based and at that time, boring. Since then, we have moved to a brand new stadium and completely re-shaped the way we play football, in fact the way football is played full stop.


Let’s see how Arsenal’s nascent resurgence changes the BBC’s reaction, so far, no change to my eyes, now, if we actually won something……


Follow us at @RightAtTheEnd and we’ll follow you back, always keen to read people’s opinions on The Arsenal.
Tagged