Anthony Alexander Adams was born on October 10th, 1966. Tony spent his entire 22 year playing career at Arsenal Football Club and for many supporters, he embodies everything that Arsenal stands for. Although Tony had some titanic personal battles to face and overcome, and served prison time in 1990/1, he typified the courage, leadership and honesty that is at the heart of our football club.

Tony signed schoolboy forms in 1980 and made his debut on November 5th 1983 against Sunderland, he'd just turned 17. I remember George Graham talking about a story that had been relayed to him by one of the England under-21 coaching staff; that on the plane flying back from an international away game, Adams took it upon himself to organise a whip round for the cabin crew. It showed leadership, but also a keen consideration for others, he worked hard and by 1985 was becoming a regular in the first team. 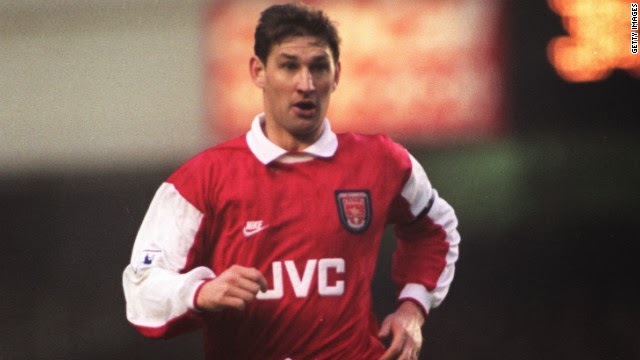 Tony is one of the bravest players I have ever seen, I was at Old Trafford for a 1-1 draw played in fierce Mancunian rain when he scored at each end. The goal he scored for us involved him diving between flying boots and bodies to power the ball into the back of the net. Minutes later, the ball skidded off his boot and over John Lukic but that was also typical of Tony - he never shirked or hid from anything. He was made captain of the team when he was 21 and kept  the armband for 14 years until his retirement. Tony's mixture of grit and graft embodied the George Graham era.

Tony played alongside David O' Leary, Kenny Sansom and Viv Anderson initially and he obviously learned a great deal from these three established international defenders, but it was as a critical part of the back four (bizarrely immortalised in the Full Monty), of Winterburn, Bould, Adams and Dixon that he is perhaps best known. When Arsenal won the league in season 1990/1991, this back four let in 18 goals in 38 matches and lost only one game all season. It was also the season of the mass brawl at Old Trafford, where we were docked two points, United one (never worked that one out) and also the year Tony crashed his car into a garden wall in Rayleigh in Essex and was sentenced to four months in prison.

It was in the aftermath of Euro'96 that Tony embarked on a phenomenal "bender" (he writes about it in stark detail in his autobiography, Addicted), that led him to consider the impact his drinking was having on himself and others. Forced to face the fact that he was a hopeless alcoholic, he sought and found treatment and ultimately established the Sporting Chance Clinic with his friend Peter Kay. This excellent charity is possibly Tony's greatest achievement and has helped a number of players and sportsmen and women to get their life's back on track. 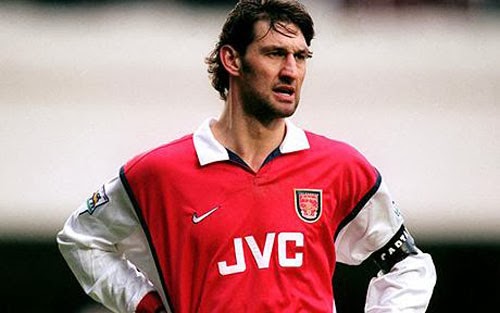 After beginning his battle with alcoholism, Tony changed as a person and I think in the period between 1996 and 2002 he played his best football. He embraced the new open playing style of Arsene Wenger and once again, became the essence of the new Arsenal. He could really play, he would carry the ball out from defence, swap passes with midfielders and build attacks. Tony's strength of personality was also fundamental to the double win of 1997/98. Early in the season, there was a feeling in the English hub of the team, that the baby had been chucked out with the bath water, in that insufficient support was being given to the back four (five). In a heated meeting, Tony argued that one of the midfield players was needed to cover and screen the back four and Arsenal developed a solidity that provided the platform for some of the best football I've seen from an Arsenal team. 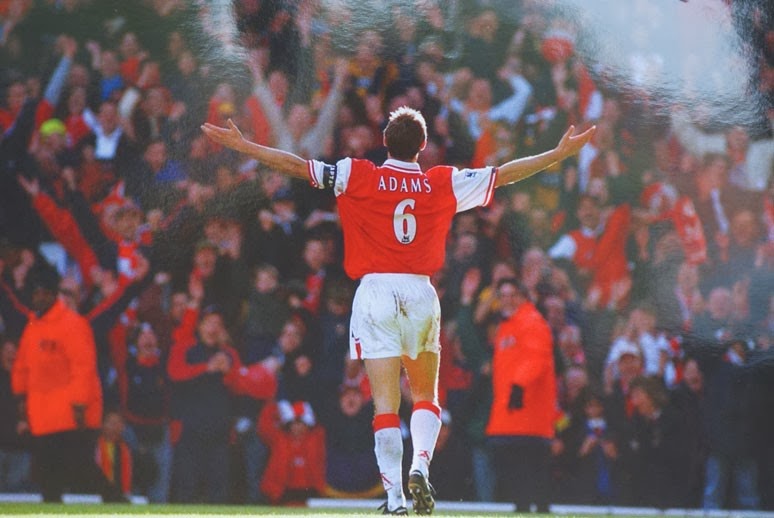 My favourite Tony Adams memory happened in the 4-0 win over Everton on the 3rd of May 1998. In fact nothing illustrates how much our club and this player had evolved as  eloquently, as the moment  he ran onto a through ball from Steve Bould (playing in midfield) and smashed a left footed half volley past the keeper in the last minute of the game that won Arsenal the title.

Since retiring from the game, Tony has struggled to forge a managerial career, but I'm sure I'm not alone in hoping that he returns to Arsenal in a coaching capacity at some point. Quite simply, he is our greatest ever captain.