Liverpool v Arsenal 1989 - "You haven't got a prayer Arsenal"

I've kept this headline, the whole back page of the Daily Mirror actually in a file full of press clippings from the time. It was printed the day after Liverpool had thrashed West Ham 5-1, a few days before we were due to play them at Anfield on May 26th 1989, 25 years ago. I hope that everyone reading this knows what happens next, if not, it was the reason Youtube was invented. It was the best Arsenal game that I never went to.

We play Liverpool at Anfield on Saturday, it's a crucial game in a series which see us play them twice, as well as Manchester United and Bayern Munich, currently being touted as the world's best team (unless you're Tim Sherwood). I thought it might be interesting to compare the position modern Arsenal finds itself in the league, with the team 25 years ago. 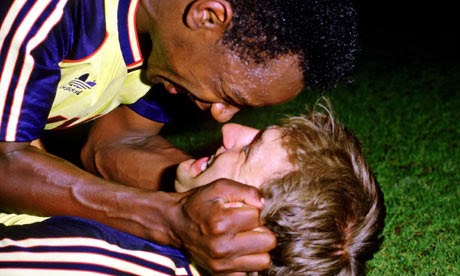 There's a scene in the film of Fever Pitch where the Nick Hornby character is playing Subbuteo with his mate and they decide to pit modern Arsenal (1989) against the 1971 double winning team. They agree that it's a preposterous idea as the two teams are a world apart in terms of fitness, diet etc.. I met Alan Smith a couple of years ago and asked him how his side would fare against the modern Arsenal team? "They'd bloody destroy us" he said.

So rather than compare Smudger to Olivier Giroud or, God forbid, Kevin Richardson to Mesut Özil, let's consider the relative likelihood of league success. In 1989, we won the league by the tightest margin ever - goals scored, we were level with Liverpool on every other parameter. In 2014 we are two points clear at the top of the league, and not really given much of a chance to be honest. I read a very good blog from an American Arsenal supporter who wrote about Gary Lineker (on a US football programme) talking at length about City and Chelsea as title challengers but rarely mentioning Arsenal. 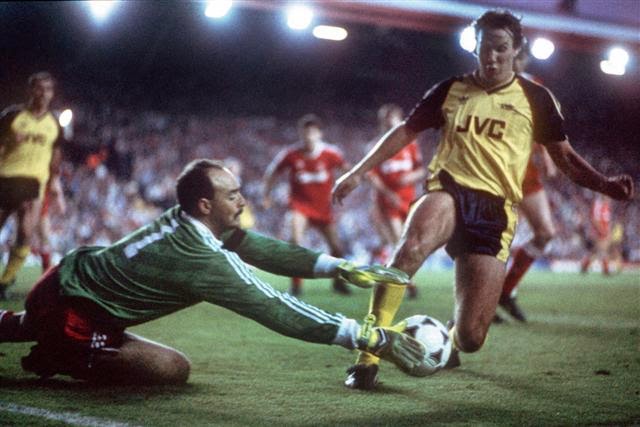 The context to both seasons therefore, seems to be an assumed inability to win the league. The 1989 team was still in it's building phase, we had beaten Liverpool two years previously in the League Cup, which was taken far more seriously in those days, especially if you won it, but George Graham's side wasn't the finished article. To the same extent, the current side is also short of a a few players.

For those unfamiliar with football in the 1980's, Liverpool were a fantastic team. In their way, more dynastic than the United and Arsenal teams of the 1990's. They dominated 80's football and were deemed almost unbeatable at Anfield, by anybody. Before May 26th 1989, we hadn't won there for 15 years. So, when the pundits talk about this City team in hushed tones of awe, let's get things in perspective, in season 88-89, we were deemed to have literally had no chance.

In the 1980's, there wasn't a feeling that one club had a greater financial depth than any other (in the top half of Division 1), in fact Arsenal was always assumed to be one of the wealthiest. Liverpool seemed to be better than other clubs at attracting and "building teams". This was the quality that George Graham and Alex Ferguson were trying to emulate. Also, football wasn't popular in the way it is now; attendances had been declining for a while, there was violence off the pitch and on it, and grounds were decrepit. In a nutshell, only an imbecile would invest serious money in any 1980's English team, given a time machine Abramovich and the Mansour family might try and buy Juventus or Milan but City or Chelsea? Never. As a result, it was a fairer fight, but we were always considered second best.

Football has changed dramatically in the last 25 years, but I feel that there are some similarities between Arsenal 1989 and 2014. The blend of youth and experience, both teams are strong defensively, and both boast a centre forward highly adept at leading the line and playing with his back to goal, allowing other players to "come in", and both teams have lost a goal scoring wide player in the latter part of the season (Walcott and Marwood).

Still, although we play Liverpool with 14 games to go, as opposed to the cliff hanging, final game of May 26th, the points that we gain, or don't, on Saturday dinnertime are just as critical. It's far too early to judge how close this season is going to be, but the point is that we're still very much in it, two points clear in February? Not bad.

If we play as well as we did against Liverpool earlier in the season we have a real chance, I think we all know how to stop them, if Koscielny neutralises Suarez as effectively as he did in the home game, we can beat this Liverpool, not many people said that 25 years ago.