Arsenal V Everton - What's wrong with being a good Cup side?

Arsenal host Everton in the FA Cup this weekend. I was tempted to write a piece about whether or not our esteemed manager would field a weakened side with the trip to Bayern Munich in mind and therefore blow the chance of continuing in a cup competition we can win, to strengthen our team in a cup competition we can't. However, I think that's unfair, I expect the manager to field a strong side on Saturday, although the injury to Jack Wilshere will have interrupted his plans. As an aside, just how many Arsenal players have been injured in pointless international friendlies?

The FA Cup as we all know, is the last trophy Arsenal won, in 2005. Arsenal were comprehensively outplayed by Manchester United and won on penalties, very un-Arsenal like and all the better for that. There's an old phrase in football: "they are a decent cup side but won't challenge for the league" but I was  wondering, that given our trophy drought, whether that being a "good cup side" was such a bad thing?

Over thirty years ago, Arsenal made it to three successive FA Cup finals, 1978, 1979 and 1980 as well as a Cup Winner's Cup final in 1980, (winning only one of them). The club's final league placing in those seasons was respectively, 5th, 7th and 4th. Arsenal were a good cup team, but they were never going to challenge for the title. Scroll forward 13 years and the club again reached four finals over a three year period (winning three this time) and Arsenal's league positions in these seasons was: 10th, 4th and 12th. So, no challenge for the title there either.

The late 1970's side was managed by Terry Neill. Belfast born, Neill played for the club from a junior, signing in 1959 and leaving in 1970. After two years managing another North London club, Neill was recruited by Arsenal in 1976 and was only 34 when he took over the reigns. He built a team that was easier on the eye after the more "traditional" style favoured by Bertie Mee. Neill gave ex-youth players like Liam Brady, Frank Stapleton, Graham Rix and David O' Leary a regular start in the team as well buying in established talent like Pat Jennings, who another north London team bizarrely thought was over the hill at the age of 32, Malcom MacDonald and Alan Sunderland. 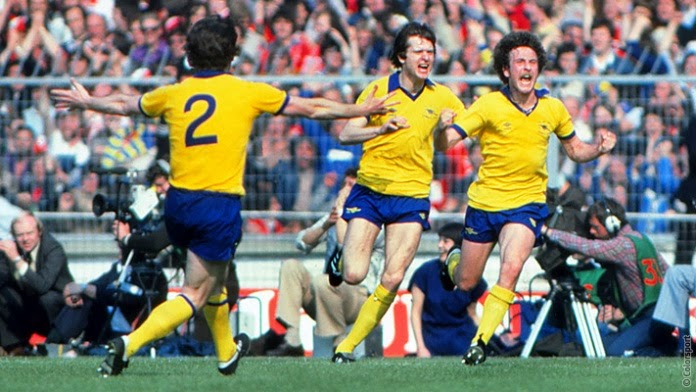 The team had flair, I always thought principally because of Liam Brady, but the ball was moved quickly, this Arsenal team actually passed the ball really well and in MacDonald, Sunderland and Stapleton Arsenal had three excellent forwards, the defence waas also very solid. Looking back, I can't see why this team didn't finish further up the table in the late 70's, although at the time, Liverpool had a team which won league titles as well as three European Cups in four years.

Nevertheless, this Arsenal team should have won more, the side beaten by Ipswich Town in 1978 was cut down with illness and in 1980, we didn't turn up against a West ham side playing out of their skin. But three successive finals was a great achievement and the1979 final (the five minute final), was fantastic.

By the time Neill had been replaced by Don Howe in 1983, (he managed to limp on after finishing third in season 1980/1981), Arsenal didn't look like winning anything, the Clock End used to cheer corners, as goals always looked unlikely. George Graham arrived and built a team that did challenge for the title and won two, 1988-89 (the most exciting game I've seen) and 1990-91, when Arsenal lost only once all season. In May 1991, Arsenal were two games away from a double, but played poorly against another side from north London, giving away a two goal lead. 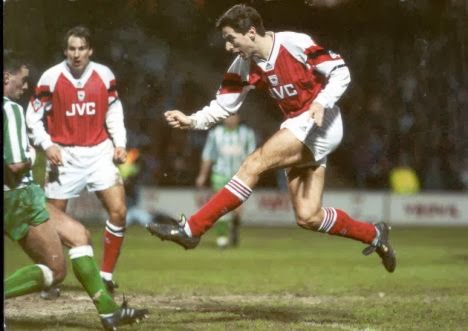 George Graham was said to decide at the outset of a new season which trophy the club would set it's sights on and then focus the squad/team towards it's singular aim. In 1993, Arsenal developed double vision as it won a unique domestic cup double, beating Sheffield Wednesday in each final, the FA Cup being won after a replay. A year later, George must have decided that European silverware was most important and Arsenal beat Parma in the final of the Cup Winner's Cup, beating a far superior Parma side (we were hammered but Smudger scored in the 20th minute and somehow Arsenal held out). It's interesting to remember that our midfield that night in Copenhagen comprised: Paul Davis, Ian Selley and Steve Morrow. Morrow was 23 and Selley 19.A year later, Arsenal were beaten by Real Zaragoza. 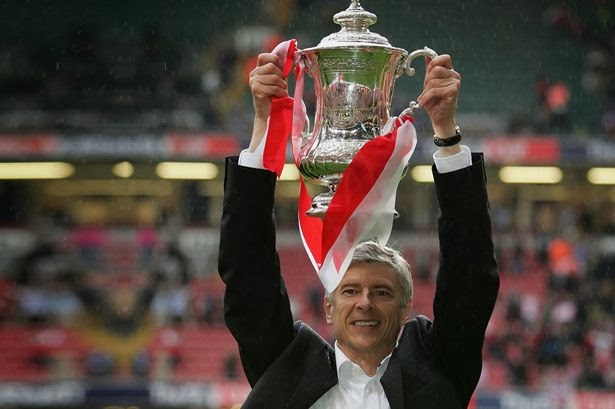 Just over two years later, Arsene Wenger was made manager and the rest is (recent) history. Wenger has won the FA Cup four times and as an avowed lover of English football, has always gone on record to acknowledge how special the competition is. It would therefore be rewarding to see him put his money where his mouth is, with a strong team selection on Saturday.