The first task facing Arsenal as they prepare for this European Champions League game is just how seriously to take the prospect of defeating, probably, the best team in Europe. Bearing in mind Arsenal are now clear favourites for the FA Cup, still in contention (just) in the Premiership and facing a huge North London Derby on Sunday, would they be forgiven for assuming fortune will takes it's course and fielding a weaker eleven tonight in the Allianz Arena?

Of course they won't, Arsenal are managed by Arsene Wenger who, despite coming across like football's leading technocrat, is as much of a romantic about the beautiful game as the bulk of people reading this blog. Furthermore, Arsenal will be buoyed by the knowledge that they beat Bayern last season and by a scoreline that would take the match to extra time this evening and Wenger also owes it to the few thousand Arsenal supporters that will have travelled to Bavaria yesterday and today. So, let's assume that Arsenal will be taking the game very seriously indeed, for starters, the derby game is at 4.00pm on Sunday afternoon. 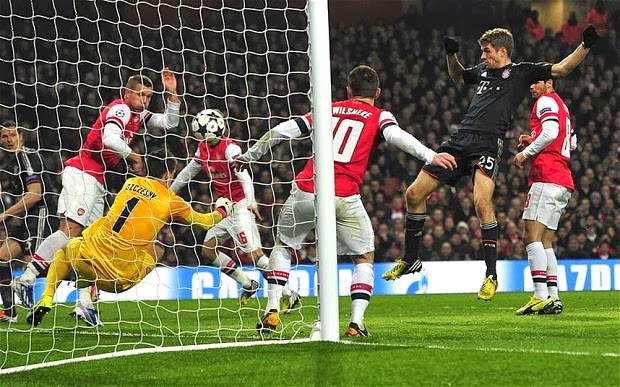 Much will have been made by the football media about Mr Wenger's comments before the match about the impact of the referee and his assistants on tonight's game. I think Wenger's comments were well judged in that he was very much reading from the "manager's guide book", by applying subtle (or perhaps not) pressure on the man in the middle pre-game. In truth, Arsenal have played more than a few European Champions League matches with 10 men. In the main, the red cards have been warranted. Wojciech Szczęsny's red card in the first leg was probably right, Arjen Robben just made sure of the big Pole's departure with his reaction to the peripheral contact with Arsenal's keeper.
However, I was in the Stadio San Paolo in December last year and felt that Arteta's sending off was harsh, this being a vital game that doomed Arsenal to the second pot in the draw making a clash with a club of Bayern's calibre a certainty. More pointedly to support Mr Wenger's argument, I was in the Nou Camp four years ago, when the referee made the preposterous decision to book Robin Van Persie for a second time for kicking the ball away - madness. Although Mr Wenger doesn't appear to subscribe to conspiracy theories, he's far too analytical for that, he evidently does harbour, as do I, a sneaking suspicion that UEFA love the really big, tier 1 clubs: Barcelona, Real Madrid, Bayern Munich etc..

So by talking about his fears for refereeing neutrality, he is "playing the game" and I would fully expect a manager of his experience and pedigree to do so. He has also mirrored, albeit in a calmer, more reserved manner, Manuel Pelligrini's concerns over selecting a referee from Scandinavia for a match of this importance. We'll have to wait and see, if he's right. All eyes on Mr Svein Oddvar Moen.
In the first leg, Arsenal played well for 20 minutes, but when they went down to 10 men, Bayern's class told and they showed great quality and patience, before carving open the north London team. After he missed the weekend's FA Cup quarter final, Arsenal will be pleased to welcome back Koscielny for this match. The French international's perceptive skills and his ability to step in and intercept danger will be critical tonight. I remember his performance against Barcelona at The Emirates, four years ago, which allowed Arsenal to take a 2-1 lead to Catalonia - he was exceptional. To marshall Tony Kroos et al, Koscielny and his defensive partners will have to be at their very best this evening and I also believe that the match calls for Tomáš Rosický's mix of tactical nous, passing ability and game reading skills. It looks very likely that Thomas Vermaelen will play at left back, which means that a degree of cover will be necessary as he isn't a natural full back in any sense. Mesut Özil made a brief to return to form on Saturday in the FA Cup and Santi Cazorla looked very spiky and dangerous, the other player that should get a shirt tonight is young Alex Chamberlaine, who was prominent in the win over Everton, but can't afford any of the clumsy errors which featured in his performance at The Emirates.
I feel that this is very much a game where the team that scores the first goal will have an excessive impact on the outcome. If Bayern score first, the ties is theirs, if Arsenal can get to half time at 0-0 and then score early in the second half, who knows? However, ultimately, as you win very big games from the bench (Bayern's is very strong, Arsenal's far less so), I think that, sadly, Arsenal will need to see the FA Cup is the best route to silverware this season.
By Ian Byrne
Follow me at @RightAtTheEnd and I'll follow you back.
Tagged