Just like old times. Arsenal go to White Hart Lane and put in a classic backs to the wall
performance, score early and defend the lead for a further 93 minutes. We'd have been forgiven for thinking that the spirit of George Graham had squirreled it's way into Mr Wenger's psyche.
A year ago, I wrote a piece called "Time to defend Arsenal". It was written the day before we were beaten 2-1 by Tottenham with a sense of trepidation inspired by what I felt was Arsenal's lack of defensive cohesion. In the article I called for Steve Bould to be given a greater coaching brief, the recruitment of a defensive midfielder and the need to fix on a solid back four and stick to it. Although Arsenal can still be torn apart by teams at the top of their game; City and Liverpool away, Bayern Munich at home being good examples, when we face more predictable, traditional "English" tactics, I have a degree of confidence in Arsenal's defensive strength which I haven't felt for a few seasons. 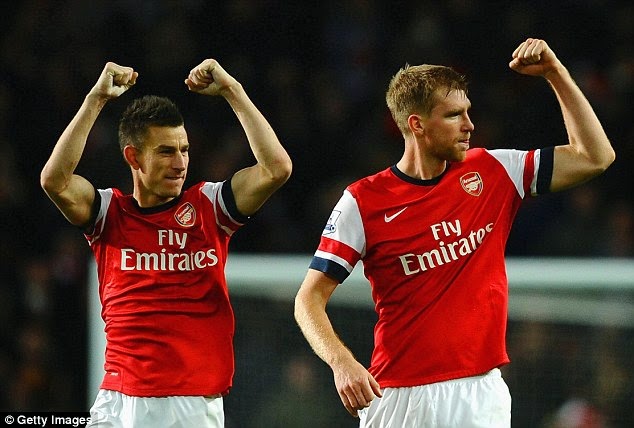 The major factor in this return to the club's core values, is the centre half partnership of Koscielcy and Mertesacker. Their commitment and desire to keep a clean sheet yesterday (fundamentally important as Arsenal didn't look scoring twice), was first rate, especially the double block on Chadli in the second half. It's well known that when these two have played together for the entirety of the match, they have lost only once. Football is about partnerships and this duo are as good as any in the league at the moment and give tremendous confidence to the midfield, full backs and goal keeper. In fact the only time that Arsenal looked in danger yesterday was when Wojciech Szczęsny fumbled the ball twice presenting Tottenham with excellent opportunities, gladly both were spurned. 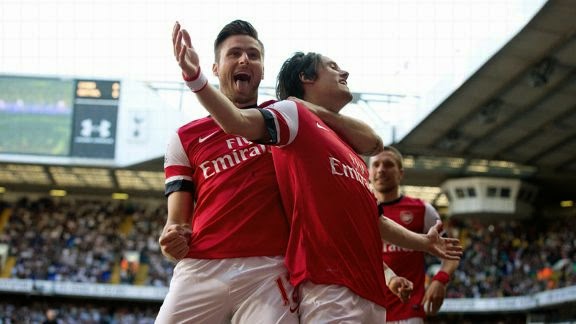 The game had exploded into life on 72 seconds when Tomáš Rosický exchanged passes with Alex Oxlade-Chamberlain and fired a rocket into the top left hand corner, Oxlade-Chamberlain had an excellent opportunity minutes later when he found himself clear, with just the keeper to beat. Proving that he can put a foot wrong, Alex tried a clever lob when he had time to round the keeper. This was a frustrating miss, but we did have the chance to see Tim Sherwood impersonating Basil Fawlty in the immediate aftermath. Barney Ronay was spot on in The Guardian this morning: "On this evidence Sherwood has not lost the dressing room but is instead leading it very eagerly and at high speed down a dead-end country lane with a crate full of energy drinks in the boot of the car."
Because Tottenham did indeed enjoy the lion's share of possession and the statistics give credence to Sherwood's insistence that "we were robbed guv". Sherwood is a passionate, but limited coach. There were an awful lot of long balls smashed towards Adebayor and his decision to play Chadli centrally and Eriksen (their best player) wide sums him up, the emphasis is on hard work and getting the ball to the front quickly. His plight reminds me of that of David Moyes, another earnest hard working man that doesn't quite get it (Mata as a winger?) 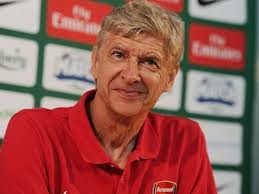 This was Arsène Wenger's 999th game in charge of Arsenal and he was delighted with the result but is wise enough to compartmentalise the performance:
"Tottenham played very well. We had an early lead and we were juggling between protecting the lead and finishing the game off. We absorbed a lot of pressure from Tottenham, they gave everything and we needed a special resilience and good defensive performance.
"It was an unbelievable start with Tomas Rosicky's goal coming from nowhere. Tottenham put the effort in and had the quality to go forward but I don't feel they had a lot of clear-cut chances.
"It was a must-win game. We maintained the focus to not make the mistake that would cost us."

Football is doing what's necessary and this game illustrated that Arsenal do have a Plan B, and aren't afraid to use it when needed. This is especially relevant with Arsenal's next fixture being an away game at Chelsea.
By Ian Byrne
Follow me @RightAtTheEnd, I'll follow you back.
Tagged