Let’s start with the good news – we won the Cup! Arsenal’s first trophy in nine years and a record 11th FA Cup victory. I was delighted for the manager (the recent painful years melted away from him in the moments after the whistle), the players and critically, us, the fans, the poor mugs that pay for everything. This was an exceptional match as opposed to an exceptional game of football.


If you are going to give your opposition a two goal lead; at least have the good sense to do so in the first ten minutes. In three of their most important matches of the season, Arsenal conceded very early; in the FA Cup final as well as the league matches at Liverpool and Chelsea – Arsenal let in 8 goals within the first 20 minutes. Mr Wenger decided to start with his 2nd choice goal keeper and although I wouldn’t blame Fabianski directly for either goal, I think Szezesny commands his goal area with more authority and gives his defenders more confidence. 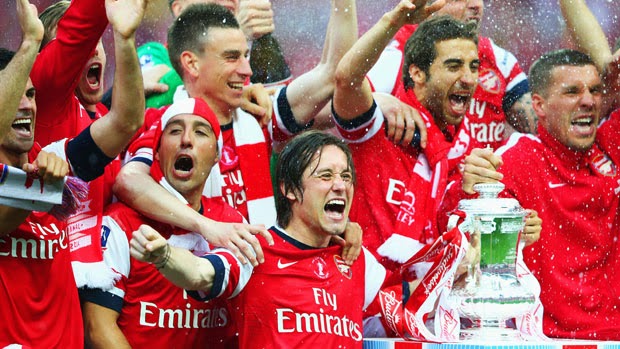 Arsenal’s defensive shape was once again chaotic, irrespective of whether you mark man for man or zonally, you have to take responsibility for your actions and defend your goal in a professional manner. When Arsenal had a corner for example, Hull City packed the six yard box forming a wall of black and amber, Arsenal left pockets of space all over the area which were too easily exploited. This may be the ugly side of the game, but it is the side which Arsenal have to improve upon.


Hull City were very spirited but also played very good football in the first 20 minutes, in fact they started the final as well as any team I can remember. They moved the ball well; they had a game plan that comprised getting the ball to the wide areas and then hitting Arsenal in its soft centre, Hull also played for set pieces and, it has to be said, pressed every advantage from the early stages of the game, including time wasting in from the first minute.


From 2-0 down, Arsenal hit back in emphatic style, Alex Bruce (as good as anyone on the pitch on the day), gave away a naïve free kick which Santi Cazorla dispatched just under the cross bar with superb skill. From this moment on, I believed that Arsenal would win, but didn’t we make long, hard work of it? This was due, in part, to Hull’s obdurate resistance but also to the joint effect of Giroud having one of his off days and let’s face it, he has to be at the top of his game to be good enough to play for Arsenal and Podolski deciding to play hide and seek for 50 minutes. Add to the mix, the lack of pace we suffer when Theo Walcott is unavailable, Ozil choosing to play only the last half hour, giving the ball away cheaply…. 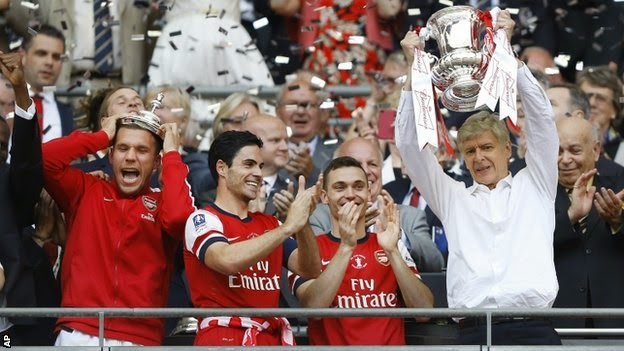 Still as the game went on, Arsenal did exert telling pressure and improved, I felt we grew into the game and improved when Podolski was replaced by Sanogo. I can’t help but like this lad, but he makes Niall Quinn look like Johan Cruyff. However, he was game, he showed for the ball and his sheer gangly, cluttered enthusiasm seemed to upset Hull’s back three, in part due to his habit of doing precisely the opposite of what was expected of him. Maybe I’ve got him wrong and he’s actually a genius, and I’m sure he’ll improve, but the performances of all three of our “strikers” demonstrate why we need to spend a significant sum on a proven central forward in the summer.


Hats off to Laurent Koscielny, who was excellent from the point we were 2-0 down. He was both sharp and brave to score the equaliser, albeit from a corner that wasn’t. A quick memo to Steve Bruce here, I agree it wasn’t a corner, but by the same token, you are supposed to take free kicks from the point of the offence, not nine yards further forward (nine yards!!) and had you been playing your old club Manchester United, you would have conceded at least two and probably three penalties.


I think the manager delayed bringing on Wilshere and Rosicky for too long, but as the match went into extra time, it was becoming clear that their introduction was crucial. Hull were tiring badly and as gaps appeared Arsenal’s player of the season, Aaron Ramsey, hit a perfect shot into the bottom right corner. There was still time for Hull to go close twice, but after 90 seconds of injury time, the whistle went and Arsenal had won the FA Cup.


The question is, will it be like winning the 1930 final, which heralded a platform for a period of genuine competitive status in fact, dominance, or 1979, which stands alone in between two sterile eight year trophy droughts? 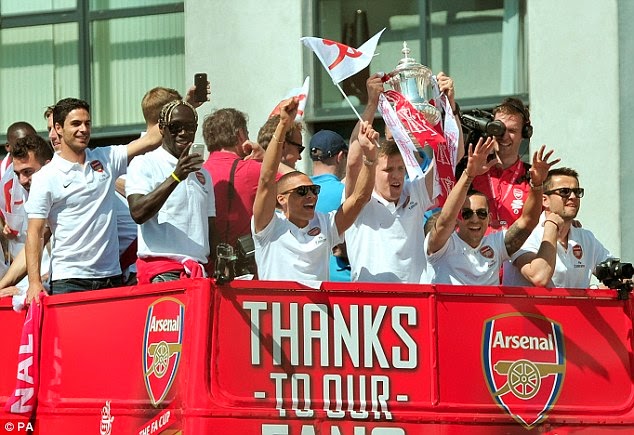 Apparently, our manager will sign a new three year contract today, whether Saturday’s victory is a precursor to an era of genuine challenge or a one off, is largely down to him. It was good to see our owner at Wembley, hopefully this peculiarly granite reptilian might have been moved by the sight of how his employees and “fan base” react to actually winning something? We will see.


I’ve not written a blog since my father passed away on May 4th. My love of football was passed to me directly by Jim Byrne, a lifelong Celtic supporter who loved to see attacking, passing football. He idolised Charlie Tully, the star of Celtic’s 1950’s team and saw Real Madrid destroy Eintracht Frankfurt in 1960 at Hampden Park. He coached a local football team from also rans to unbeatables and claimed that the Spanish World Cup winning team had stolen his coaching ideas!


One of my favourite memories was of Dad at the Emirates, approaching Paul Davis and chatting with him amiably about how Arsenal had moved the ball that afternoon and comparing it to the late 80’s midfield. Paul couldn’t have been nicer. Goodbye to a real football man – RIP Dad.