None of the four English teams in the European Champions League have emerged with any deal of credit after the first stage. Liverpool were the only team to win and that was courtesy of a late penalty against the team supposedly ready to assume the mantle of group whipping boys. Chelsea threw away a goal lead (although I love Mourinho's face when he accuses other teams of parking the bus), City struggled to make an impact against Bayern and Arsenal were torn apart by a fast, mobile, attacking BVB.

The first games are always tricky, but Arsenal have often started with an away tie but usually won. However, right from the off the alarm bells were ringing as wave after wave of yellow players scythed through Arsenal's disjointed back lines. Admittedly, we started with young Bellerin at right back and his inexperience was exposed repeatedly, but it would be disingenuous to blame one young player for what was an abject performance. 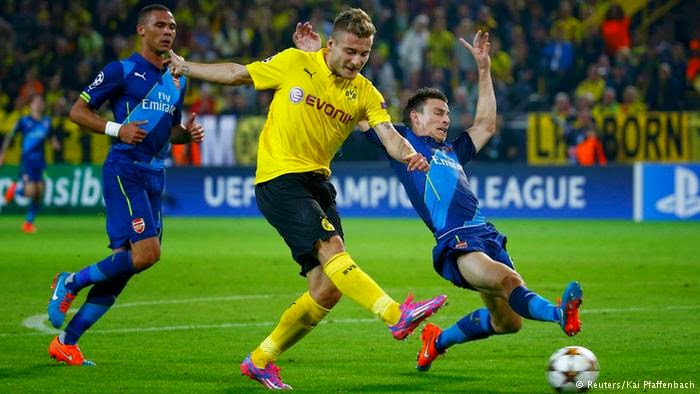 Let's not disguise it either, Arsenal were flattered by the scoreline, we could have been four down at half time. The shape, disarray, poor decision making, bad covering and marking were identikits of the way Arsenal played against Liverpool and Chelsea in away fixtures last season. What was particularly galling was that the team had played very well (in the second half extremely well) against City last week and although we had carried Ramsey and Ozil again, still looked as strong as one of the most expensive teams in the league.

So what went wrong on Tuesday? I avoid twitter during and after matches - because I like watching the game and in the aftermath of matches, twitter is hardly the place for dispassionate analysis. However, I can imagine that there were vociferous accusations that the result against Dortmund would have been different if the manager had signed a "DM" in the summer. I see this alot and there is some truth in it, if there was a replacement for Patrick Vieira (because that's who we've never replaced) out there in the marketplace, for  decent fee, I'd be frustrated if Arsenal didn't try and secure him. The point is, there isn't. Carvallho is a good player, we should have and did try to sign him, but there is a financial level at which the fee demanded by the selling club is inappropriate.

Furthermore, the game has changed. These days teams using players like Yaya Toure are rare, very rare and most teams depend on a holding two at the base of their midfield, especially away from home - why? Because it works, that's why. I felt very sorry for Mikel Arteta the day after, he was slaughtered in the press and the blogs. He didn't play well (he wasn't alone), but the way the manager sets up the team at the outset of the game causes Arsenal significant problems time and time again. Dortmund were very unlucky not to score early in Tuesday's match, and if they had, as opposed to scoring just before and after half time, we would have suffered a battering. Any shape we had would have evaporated and the gaps would have been huge. 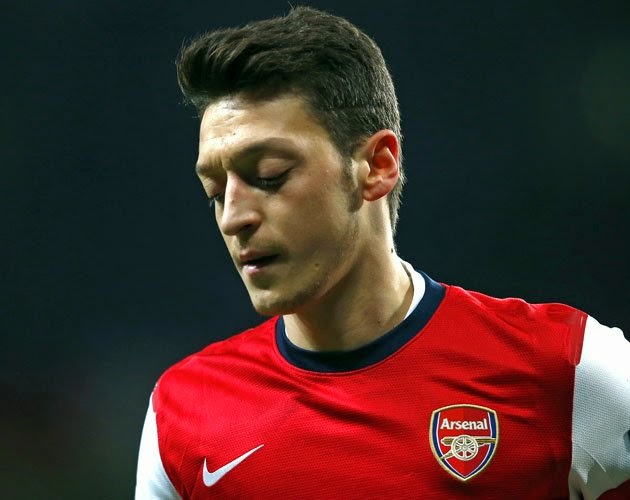 This is not about whether Ozil is being played on the wing or centrally by the way. It's about marrying the right attitude with the right shape. On the morning of the game on BBC Radio 5 Live, John Lukic said that Arsenal should set out to get a point in Germany. He was spot on. We should have expected BVB, in front of a huge, vocal crowd, to start quickly, and the smart move would have been to play Arteta and, one of Ramsey, Wilshere or Oxlade-Chamberlaine, in front of the back four. Ozil and Sanchez needed to drop deeper and stay there, until the impetus of the early attacks had been weathered, it's simple, get enough men behind the ball and make it difficult for them.

I'm conscious of a contradiction here (having maintained that Arsenal needed two holding midfielders), but in a competitive game of football, players have to make decisions about where they need to be on the pitch at certain times, especially when they haven't got the ball. They are allowed to move and change positions, they're grown ups, it's not table football, they are not pinioned at a specific point because they are attached to a steel rod. 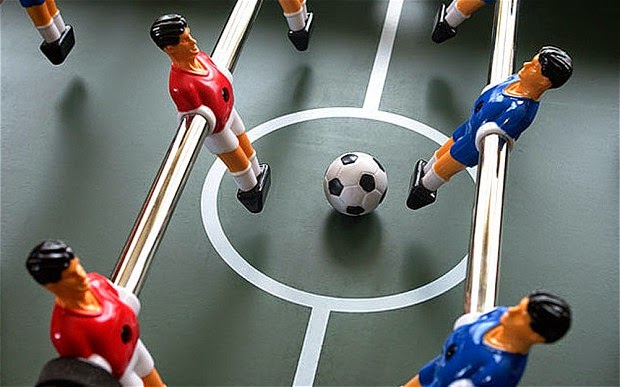 Tomorrow we go to Villa Park for  3pm kick off - how nostalgic! Villa are on the move again, the management team of Lambert and Keane are working well and making an impact. So the smart thing to do, would be to assume that it's going to be a tough afternoon and that for large periods of the game, we won't have the ball. Arsenal should play Welbeck (more about him in a future blog) in front of three midfielders - Oxlade-Chamberlaine on the left, Ozil in the middle and Sanchez on the right and behind these, Ramsey and Wilshere as deeper lying holding players. Will Mr Wenger pick that team? Probably not, he never does what I think he should do and he's the man in charge with the track record etc...

It's not just about who you pick though, it's about the decisions they make.

Worse of all, I'm still none the wiser why we had to play in that awful blue strip, looks like something from Gladiators.

Credit where credit is due, when the window opened, if I thought we would end the period with Sanchez, Debuchy, Ospina, Wellbeck and Chambers I'd have been happy, to be honest I would have complained about spending £16 million on an unproven 19 year old, but hindsight and a few promising appearances are wonderful things. As it is, we have spent £82 million (that's a fortune in our terms) on some very good footballers.

However, we didn't buy a replacement for Vermaelen and the fabled defensive midfielder's capture still eludes us. I do believe that we looked at some alternatives for the former but it didn't happen and although we did bid for Carvallho, we pitched up short. I think this points to a dual flaw; despite the reputed change in the decision making structure at Arsenal, in that the manager now recommends players and the recruitment team does the deals, Wenger's influence is still too keenly felt. Of course he's the manager, but look at the relative merits of those brought in this summer. 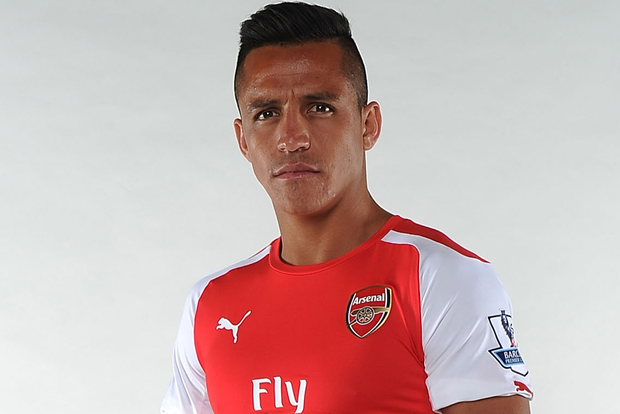 The manager has always been in thrall of existing superstar players (he just never signed that many) and as soon as the Emirates induced financial drought abated, he bought Ozil, so he couldn't resist Sanchez - and thank heavens he didn't, he's a top, marquee signing of the type we've been shouting for. Furthermore, Wenger loves to be seen as the prime mover in the development of young players (overall he's done this successfully) so the £16 million for Chambers was a classic Wenger buy. Debuchy, Ospina and Wellbeck are established, highly rated club players with some international pedigree. 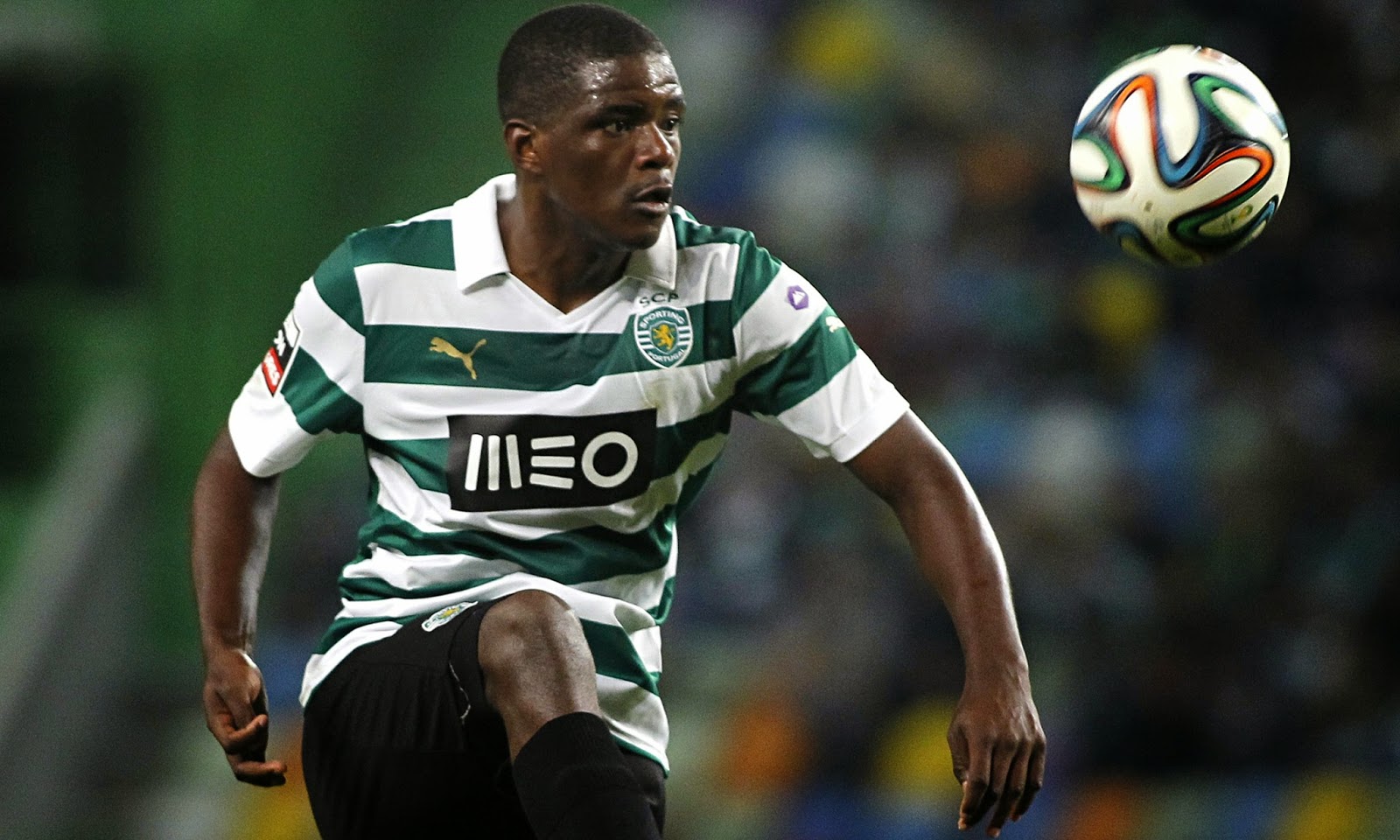 So it seems to me that as long as Wenger is calling the tune, we will see Arsenal players selected in his image and the direction the manager wants us to take and continue to follow. The second issue is more do with organisational structure. The blueprint (excuse the pun) for talent acquisition in the premier league, is Manchester City. Every season, they sit down in October to assess their targets for both windows and endeavor to complete the signings early in both periods. They have the right people in place and are capable of working on multiple targets concurrently. Arsenal don't do this, on the last day of the window, our leader absented himself to manage a team in a friendly in a Rome.

If Arsenal had signed Carvallho and Hummels as well as the existing five signatures, as supporters we'd be in seventh heaven. Not signing  a centre half to replace Vermaelen was plain lazy and stupid. We now have three players to cover two positions and only two established proponents in these vital roles - not good enough. It is often said that Wenger does not acknowledge defence as an equal component to attack in footballing terms, the lack of new additions in this area of the team confirms this. 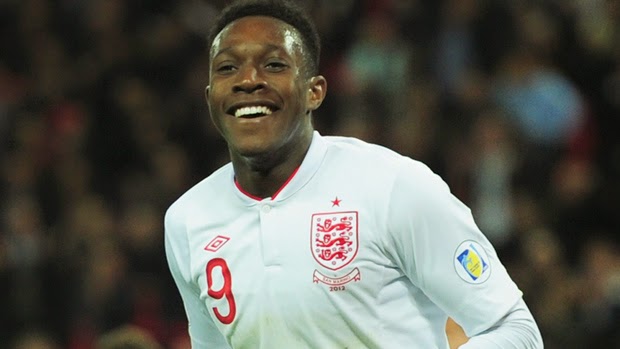 Moving forward, the next two signings at the club need to address this weakness in the squad - will it happen? Your guess its as good as mine, but overall, from an attacking perspective, an excellent window. I'm especially interested to see how young Danny Wellbeck does, and I like the prospect of the club playing more British players, whether this is intentional or not.