Apparently Arsenal may have subconsciously underestimated Anderlecht last night, is there any chance that our glorious leader will subconsciously neglect to collect his pay packet for this month? I doubt it. It's the manager's job to ensure that his team underestimates no-one and no team, Wenger's comments cast an interesting light on defeats such as Bradford City away and Blackburn Rovers at home. However, the purpose of my blog isn't to demand the manager's head on a stick, there will be enough internet warriors out there looking for that outcome.

Instead, I'd like to cast my mind back to a time when Arsenal supporters could walk around London, not impervious to criticisms of the club, but at last able to point out that we were no pushover, that the players could and would (literally) fight for the shirt.  If we scored first in a match, we would often win that game 1-0, those were the days when our defence was the stubborn element at the club, not the manager. 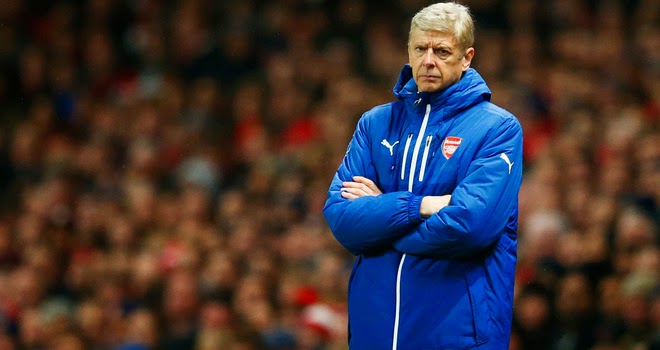 It was February 2011, when the Arsenal managed to throw away a 4-0 winning margin against Newcastle, but last night was worse. We were winning 3-0 at home, but the warning signs were there from the start. Arteta enjoyed some reasonably favourable comments until he was withdrawn, but one of his primary tasks is to block wholes making it difficult for the opposition to get into dangerous territory. From the off, Anderlecht repeatedly got behind Arsenal's porous "defence", the real difference between the sides was that we were more efficient going forward.

One of the principle reasons for this is that Arsenal are hopeless at tackling.

Watch Chelsea carefully, when their players tackle, they do so, in a traditionally effective manner. Chelsea players (all of them, not just midfielders and defenders) try to get face on to the man with the ball, they make it hard for him to rush past and then they kick at the ball. I use the phrase "at the ball" advisedly; they are trying to win the ball from an opponent, by going for the tackle with controlled aggression, but at the same time, they are placing a small risk on being injured, albeit marginally. The key is to regain possession. 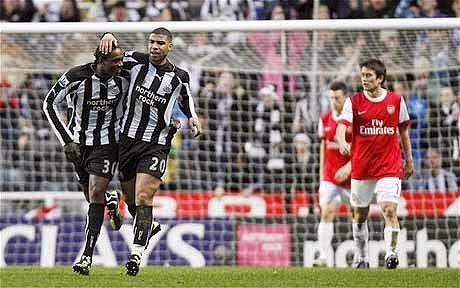 Arsenal players don't tackle like that. Arsenal players prefer to run alongside their opponent, they tend to waft their feet/legs towards the ball in the hope that they can swoop the ball away to safety, I am convinced this is one of the reasons Arsenal players suffer so many muscle tears and strains. Gael Clichy was amazed on arrival at City that he was actually encouraged to tackle in training.

Arsenal don't block space by standing up, they allow the player to get level with them, and if their half-hearted attempt at a "tackle" doesn't come off, then that player is already close to getting beyond our last line of defence. This smacks of the players trying to avoid getting hurt and as your Dad told you when you were a kid, you are more likely to get hurt pulling out of a tackle than by going in 100% to win it. We invite trouble onto us by lacking physicality in key areas and at key times of the game. 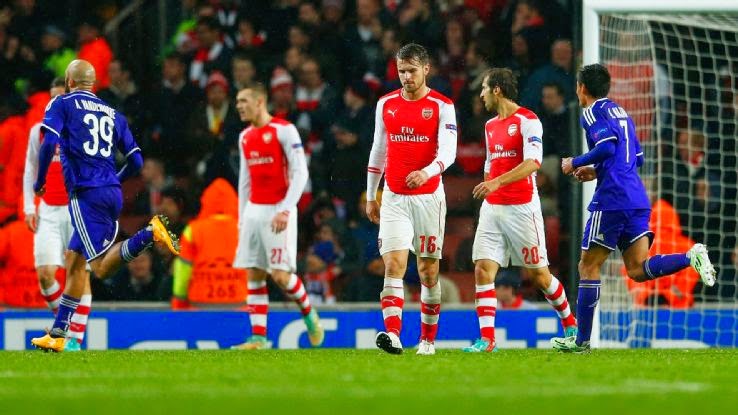 Admittedly, the first Anderlecht goal was offside and the penalty slightly questionable, but don't blame the referee. Let's face it, we didn't deserve to beat the Belgians in Brussels, we were hopeless. Perhaps this was karmic, but 3-0 up at home with only 30 minutes of the game to see out? Get your men behind the ball, it's simple. Our manager is a tactical cretin when it matters most.

Yesterday, I wrote a blog speculating that the arrival of Alexis Sanchez might lead to an inculcation of a winning mentality at Arsenal. Fat chance of that on the basis of the last thirty minutes yesterday evening.