Whatever happened to Lucky Arsenal?

The phrase "lucky Arsenal" was coined as far back as the 1930's. It referred to Herbert Chapman's teams balance of defensive solidity and attacking guile and the penchant the club enjoyed for winning games against the run of play, Arsenal were also referred to as "the Bank of England" club. Unfortunately, 80 years later, luck seems to be a precious and rare commodity as far as the modern Arsenal are concerned.

The reality of course, is that you do make your own luck A good example of this in football, might be, that when you find yourself clear in the box with just the keeper to beat, then don't shoot straight at him, another example might be, that when you are six yards out and presented with a free header, try getting it on target, that way, you have a chance of scoring. 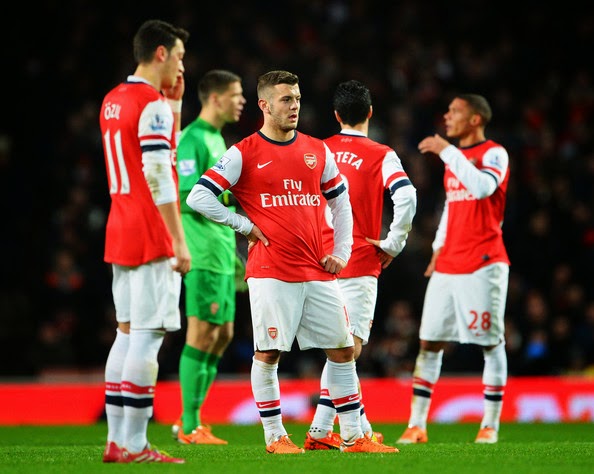 Last night, Arsenal should have been three up by half time. That they weren't was purely down to sloppy, ineffective finishing. I have rarely seen a more disjointed United side (or the Viv Nicholl's 11 as I like to call them - ask your Mum), totally there for the taking. A good, competent side, with real grown up professionals (Chelsea for example) would have had the game home and hosed by the interval. It was a fairly typical performance from Arsenal, plenty of movement, good passing, chances ctreated and spurned, there you go, your make your own luck.

Van Gaal, played there centre halves, with the undemonstrative and shaky Smalling as pack leader. He was relying on Van Weasel and Rooney up front, with Shaw and Valencia as wing backs. To further help the Arsenal cause, Shaw went off after 15 minutes. Although Arsenal were missing Koscielny (and we are really missing him), but faced with this United side, Arsenal should have won the game easily. We palyed smartly, I was impressed in the first half by Alex Oxlade-Chamberlaine, Sanchez looked a little jaded, understandably, but Jack Wilshere was always looking for the ball and distributing it intelligently and was playing with a controlled aggression.

In truth, Wilshere could have easily have walked when he lent his head (a la Pardew) into Fellaini but the Belgian's superior height meant that Jack connected with his sternum as opposed to his face. Also, Arsenal are now benfitting from referees reticence in punishing England imternationals, we started with five yesterday. When I saw that Mike Riley was the appointed official yesterday morning, my heart sunk. I've previously written about our issues with this individual, but overall, his mistakes were evenly distrbuted between the two teams. Wilshere could have gone, but then so should McNair for his ankle cruncher on Wilshere, watch it again, he gets nowhere near the ball and takes out Jack's ankle studs up. As yet, I haven't heard how serious his ankle injury is. Fingers crossed for Jack though, he's really becoming an excellent player. 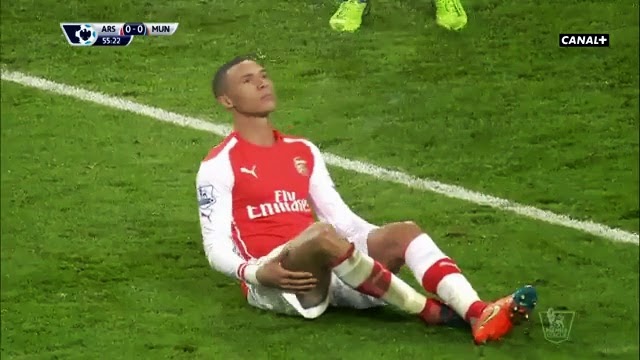 In a match to which United barely contributed, it took a piece of freakish luck to get them on the score sheet. Although it was Arsenal's persistent lack of defensive composure that created the opportunity in the first place. The aren't enough leaders in tis Arsena l team, in fact, apart from Wilshere and maybe Mertesacker, I can't think of any. As a result, there is a nagging tendency for Arsenal to resemble startled rabbits in their own 18 yard box. The Gibbs own goal was emminently avoidable, but it also had a taste of the inevitable about it as well.

United were 1-0 up, without having a shot on target. What followed was even more inevitable, Arsenal decided to throw everything at the ten men United had put behind the ball. This involved having all ten outfield players (all ten!) camped in the oppostition half. Therefore, when United did get a shot on target in the 86th minute it was from an unmarked Wayne Rooney, comical. 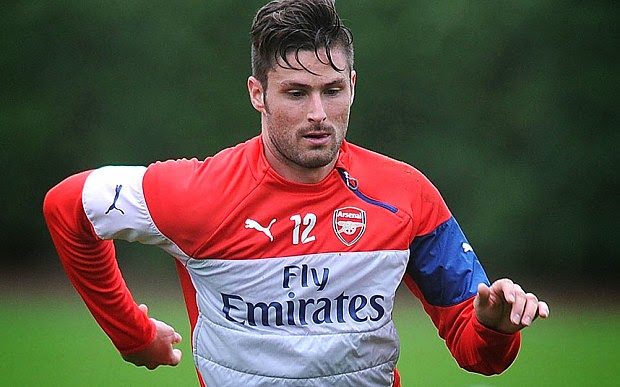 Giroud came in, looked very good and scored a cracker and that was it, beaten 2-1 by a bunch of chancers. I've rated Van Gaal's teams in the past, the 1995 Ajax team in particular, but I don't rate him. I think he's a charlatan and will be found out sooner or later. Perhaps this is happening already, 90% of his team's supporters are muppets, but there is a hard kernel of followers who will look at yesterday's performance and acknowledge that they were very, very lucky to win that game.

Will Arsenal's luck change in the near future? I doubt it.