We've been here before don't forget. Just over twelve years ago, me and my good mate Trev, met early in the morning at Heathrow for the flight to Milan Malpensa and then spent an enjoyable day "preparing" for the fixture that evening. The weather was persistent drizzle as we took the metro and the tram to the Guiseppe Meazza. As we all know, an Arsenal team missing uber warrior Patrick Vieira, Dennis Bergkamp (flight tied), and critical defenders; Martin Keown and Lauren, literally massacred one of the better teams in Europe, a club with a history steeped in the folklore of catenaccio, a team which had beaten Arsenal 3-0 at Highbury by 5 goals to 1. We even had Pascal Cygan playing at centre half!

However, the mists of time are a wonderful thing. Yesterday I looked at a transcript of the game and it's easy to forget that although this was Thierry Henry at his unplayable best, let's not forget it was 1-1 at half time and we didn't string a pass together for 25 minutes, and though the second half performance was fabulous, the last three goals were scored in the final five minutes. Nevertheless, the result did the trick, it was in many ways the springboard of belief that the Invincibles needed and was a critical turning point in the season. 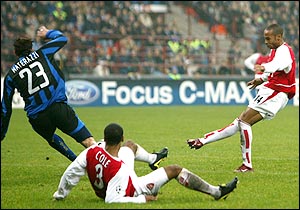 Back to Milan - we took our seats, and then we stood on them for 90 minutes and witnessed one of the greatest away performances by Arsenal in Europe, although Henry received most of the plaudits, I remember Edu's performance as being excellent in particular. After the game, we were kept back for almost two hours, the local Carabinieri demonstrating their colours and lack of good humour and we exchanged with a solitary Gooner, who seemed to have watched the game from behind the Internazionale director's box. Eventually, Trev and I ended up in a restaurant bedecked in black and blue scarves and shirts until the very early hours, and we were treated like a form of football supporting royalty, truly, truly memorable.

So, can we do it again? Of course, there's a chance. We're missing key players, as the 2003 San Siro side were, and the knowledge that the game has to be won lends it the simplicity of clarity. I assume that the manager will play the same team that beat Sunderland on Saturday, therefore a return to the Karaiskakis Stadium for Joel Campbell and it's a huge night for Olivier Giroud and Mesut Ozil. We're missing our two best players in Sanchez and Cazorla, but the back four is settled and we have a world class keeper to boot.

There will be goals, so I'm going for a see-sawing 3-2 victory to Arsenal.