Back in the "dark days" at Arsenal, when the club had sacked George Graham and were pondering whether recruiting Bruce Rioch would be a good idea, I remember saying to a fellow supporter, that I'd be happy with any manager able to pick a team capable of putting a few passes together. I suppose I was demonstrating exactly the lack of perspective that I see in spades on twitter after the latest setback affecting Arsenal Football Club. 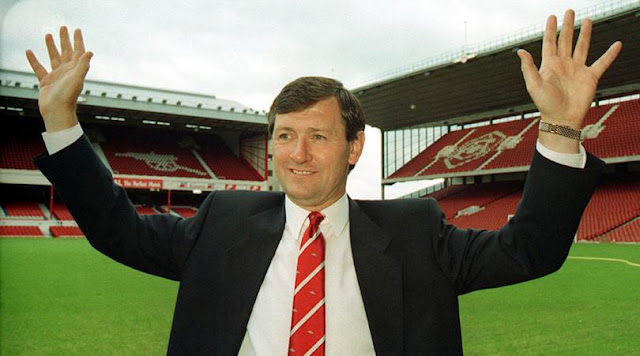 Let's not forget that although those days seemed pretty grim, it was only two years after a period when Arsenal had won five trophies (two leagues) in a six year span. My gripe, and that's all it was, a gripe, was that Arsenal were falling behind our competitors in terms of playing style and competitive calibre. To be frank, the football in the last few months under George was poor, his early teams were unfairly criticised for being long ball and gung ho, but in the last days, that criticism was very valid.

Bruce Rioch was appointed, and the football did improve - marginally, that Arsenal had paid £7.5 million to acquire the services of Denis Bergkamp obviously helped, but the manager lasted only one season. In 1996, Arsenal shocked English football by recruiting a largely unknown (I had no clue who he was...) Frenchman, then managing a team in Japan.

The rest is history, and it really is, Wenger won the double in his first full season, built one of the most exciting sides seen in any league, shattered Manchester United's dominance, fundamentally changed the way football was coached and managed in England, as well as leading the strategy for the building of new training facilities and a brand new 60,000 stadium. Such was Wenger's involvement in the delivery of the new Colney that he had a say on the design of the coffee cups. 20 years on and he's still with us. His salary is reputed to be somewhere between £9 million and £11 million a year, his position at the club seems to be as solid as reinforced granite - in effect,  the Chief Executive reports to him, but after some encouraging results this season, the inability to beat Watford, Swansea, a frankly crap Manchester United side are looking exactly what they are, indications of a manager whose tactics and overall approach aren't cutting the mustard anymore.

The Stalin - Mr Bean quote was levelled at the former iron Chancellor, Gordon Brown by Vince Cable in the House of Commons (apparently they are good friends....) and perfectly summed up the then PM's demise. Brown, like Wenger, seemed to be the last to realise that his powers had waned and he found himself in the type of negative mode, whereby, the harder he tried to get things right, the more they went wrong.

Sadly, our glorious leader finds himself in the same, leaky boat. Arsenal haven't played well for months, we were proficient against Tottenham, did a "good job" against City at home, but haven't played really well since beating Manchester United 3-0 in October 2015. It's the same every week, we swarm around opposition team's massed defences because they invite us to do so, as they know that's how to play us. Sanchez, a genuine top draw footballer, collects the ball wide and turns inside the full back time and time again - almost always nullified by a centre half, Joel Campbell can't buy a regular starting berth, neither can Danny Welbeck. Match after match we create a host of half chances convert the odd one, here and there and rarely look like winning unless we score first.

We will get hammered in the Nou Camp, and will probably draw, at best at Goodison Park. So in the space of three weeks we will find ourselves out of every competition. Tragically, the nature of corporate management and ownership dictates that we are stuck with our odious, unambitious owner and board of directors. For the record, they are the real problem, but their go-to man, who collects over £27,000 a day, must answer for another season of disappointment.

He's a class act and his done great things for Arsenal, so he deserves a dignified exit and conclusion to his 20 year tenure, but it must end.