First things first, thank heavens we avoided Chelsea and Tottenham in the semi final draw. At the moment Chelsea look unplayable and I don't think Arsenal's current form would lead supporters to relish a North London derby in the semi final on the 22nd April. Let's face it, our recent form has been rubbish, we've beaten three teams, two of whom don't play in the football league and Hull City, with a disputed handball goal and a spot kick. We were hammered 10-2 over two legs by Bayern and didn't contest at all in matches at the Bridge and Anfield.

However, as is often the case, we've been lucky. We play City on April 2nd in the league at home and therefore have an opportunity to assess how we might line up against them at Wembley. Also, we do have a chance, less than 50/50 maybe, but a chance nevertheless, to beat the northern lottery winners. Why? Well they play open football and for whole sections of matches, simply refuse to defend, they are just like Arsenal, just better financed and just, well, better. 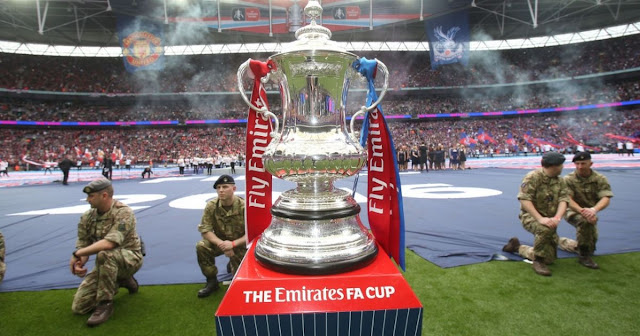 Apparently, the scan on Harry Kane's ankle is booked for tomorrow with the results within 24 hours. With or without Kane, if we played the Spuds this afternoon, they would beat us. Chelsea could and would knock 3 past us, we're that poor at the moment. So apart from drawing City why are we lucky? In a classic supporter's case of clutching at straws, what we have in our locker is the time to get things back on track. Arsenal's next opponents are:

Admittedly, the two away fixtures are against teams right in the relegation mixer and managed in one case by sometime "nemesis", "Fat Sam". Still these matches offer the opportunity for our esteemed manager to settle on a line up and formation that can get us across the line. There are no Champions league games to complicate planning, we average a game a week, whereas City on the other hand could be heading for a bit of a fixture pile up.

If the Citizens get past Monaco this week, which is eminently possible, they will have to factor in a Champions league quarter final first leg on either April 11th or 12th, with the return leg on the 18th or 19th of April, potentially less than three days before playing Arsenal on Saturday 22nd, this second leg, could also be (of course) away from home.

Therefore, eight matches as opposed to our five, including league fixtures against Liverpool and away at Chelsea. See what I mean? Lucky Arsenal. So my advice, is get in front of the box tomorrow night and cheer on the lads from Manchester, a win might be crucial for the Arsenal.