Wenger - Three at the back against Tottenham

Arsenal were lucky to beat Leicester City last night, an own goal on 86 minutes from Robert Huth separating the teams. Arsenal enjoyed 70% possession and created five shots on target, Leicester managed three with 30%. Not good.

The manager started with three at the back but made two changes to the team, I understand that Oxlade-Chamberlaine needed some protection from a slight injury sustained on Sunday, but I can't see why Rob Holding deserved to be dropped, he was excellent against City. I've always felt that the one element of the team that should be spared rotation is the defence. Gabriel played quite well again, Koscielny is easily our best defender and Holding has complemented the pair well, admittedly, the away game at 'Boro was shaky, but the three looked resolute against City and by the end of the match, almost assured.

I would hope that Wenger sticks with this formation. One immediate benefit has been that the team has had to learn and adapt to a new system and therefore, they have had to analyse why and where the previous configuration wasn't working. With four at the back and two so called holding players (they aren't), our full backs don't demonstrate sufficient discipline to keep a working shape. With three at the back, straight away there's cover for the wing backs and both Monreal and Oxlade have adapted well looked very good. Therefore the decision to move Monreal back and bring in Gibbs (nothing against Kieran he's a top player) was puzzling.

We rode our luck against City in the first half, they had a perfectly good goal disallowed just before half time and if they'd gone in on 45 minutes a goal up who knows what might have happened. Nevertheless, they didn't and we improved markedly after going a goal down early in the 2nd half. I remember being at Wembley 24 years ago when we were outplayed by a good Tottenham side (Arsenal were short in midfield that day), for most of the game, but nicked the game 1-0, it's also a nice opportunity to post this picture of Tony Adams. It's true that Arsenal have a good track record at Wembley, but the game against Chelsea will be very tough. Fortunately, we can forget about that for the time being, the league is our immediate concern. 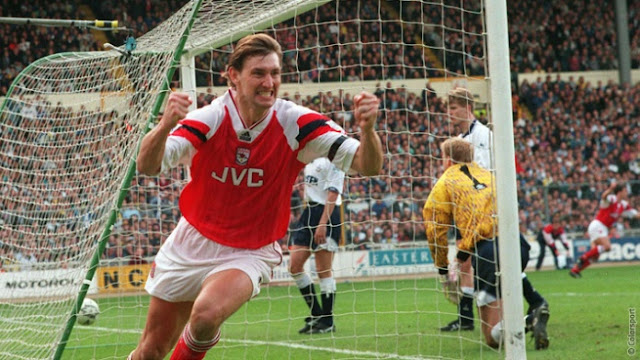 The away game on Sunday is going to be very difficult. Tottenham are bang on song at the moment and look very likely to score, and this is why I would have definitely stuck with the same back five to build consistency. You have to ask the question how many Arsenal players would get into the current Spurs side and I can't get past two or three and I'm being charitable. If we keep Kane quiet then they can open the game through Ali, Son or Eriksen, and they have two genuine defensive midfield players who win the ball and break up play, a very reliable back four and a quality keeper, on paper we're toast. Still, luckily the game is played on (almost) grass as they say.

I think Arsenal should take a leaf out of the George Graham book on Sunday. Go for a point, play three at the back, play two defensive midfield players, or the closest we have, drop Ozil and Walcott shouldn't even be on the bench. Play Welbeck, Sanchez and Giroud.

Giroud is actually our best defender from set pieces and they are going to get a lot of corners and free kicks. Danny missed a few good chances on Sunday, but, he caused all sorts of problems, he's quick and strong and he'll create space. Above all, Arsenal need to play deeper, make Tottenham try and get through seven footballers, let's do to them what the bulk of teams do to us at the Emirates, make it difficult, frustrate and nick it on the break.